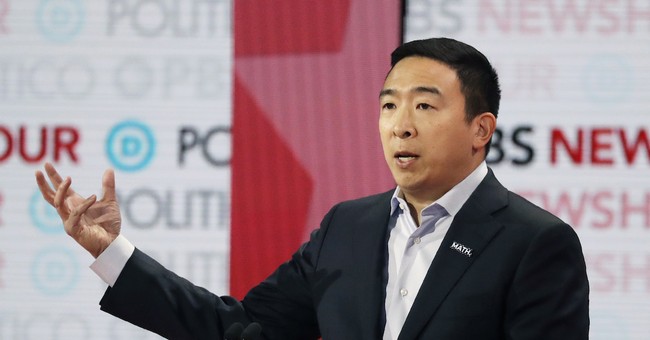 Former Democratic presidential candidate Andrew Yang published an alarming tweet on Friday calling for Americans to show barcodes in order to prove they've been vaccinated for the Wuhan coronavirus.

Is there a way for someone to easily show that they have been vaccinated - like a bar code they can download to their phone? There ought to be.

It turns out Yang is a complete totalitarian. No wonder Silicon Valley loves the guy. Others, on the other hand, aren't so thrilled.

Yet, we can’t require IDs to vote? Interesting. https://t.co/3hnocy8VNf

Hi Andrew,
Thanks for your thought(less) question! Maybe there IS a way to show it! Would a tattoo on your forehead work for you?! How about a number on your forearm or a Yellow star for dissenters?!
Not if I can help it!#2ndAmendment https://t.co/wKssvz82sA

I like Andrew, have had him on the show, he’s welcome back and would love to shoot hoops with him.

This sort of centralized authoritarian control that Democrats want around every part of your life is why there are so few moderates left.

Star on their jacket, maybe? https://t.co/qEaYTjGHCQ

No Andrew, this is the home of the free land of the brave.

It's obvious Yang's free money would come with certain 'conditions' being met. https://t.co/5cmzI2Fv8Q

do you want to remain part of the same country as this person?
i dont https://t.co/6mUs9DXxZQ

I'm sure I missed some good ones in the ratio, but you get the idea.

Also on Friday, New York City Mayor Bill de Blasio came out and admitted that his goal was to redistribute wealth. Was Friday national coming out day for totalitarians?

Yang's comments are even more concerning given that Biden appears to be awarding cabinet positions to the Democratic candidates who dropped out before Super Tuesday so Biden could "win" the nomination. You know, kind of how Biden "won" the general election.