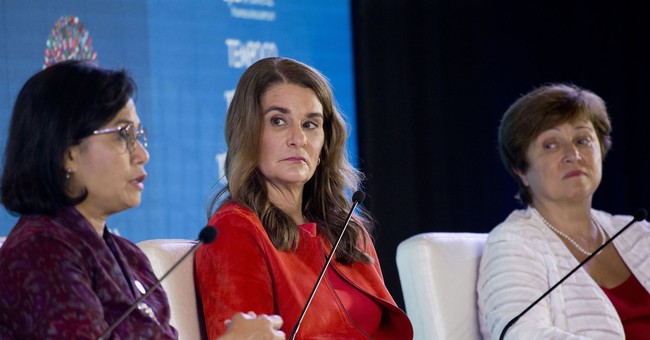 Gates, co-chair of the Bill and Melinda Gates Foundation, told CNN's Poppy Harlow that it's America's and other high-income countries' responsibility to make sure impoverished nations get access to the vaccine just as quickly as everyone else.

"Everybody needs this vaccine," complained Gates. "If we only get it to the high-income countries, this disease is going to bounce around. We're going to see twice as many deaths. And our recovery of our economies is going to be much slower than if we get the vaccine out to everybody."

If Melinda ever flew commercial, she might be familiar with the advice of placing the oxygen mask on yourself before assisting other people. The Gates were skeptical that Operation Warp Speed would even produce a vaccine by year's end, but now they worry about Americans getting it first. The only thing consistent with these globalists is they always want America to come last.

While the Gates were doubting the 2020 arrival of a vaccine, the Trump administration was sending millions to states and coordinating efforts to distribute the vaccine as soon as one receives approval from the FDA.

Melinda Gates, who warns about so-called "vaccine nationalism," said President Trump's executive order putting Americans first in line to receive the vaccine "is exactly what we were worried about."

Gates said Trump should invoke the Defense Production Act, for the umpteenth time, and scale up "lots and lots of manufacturing so that not just the U.S. gets vaccines but everybody gets vaccines."

I agree. Trump should order Microsoft to stop everything else and focus on producing 8 billion doses of the vaccine immediately. While he's at it, Trump should order Microsoft to start hiring American workers. The same mindset that leads elites like Melinda Gates to be "incredibly disappointed" at the thought of Americans receiving the vaccine first is the same globalist mindset behind the outsourcing of American jobs. These people are citizens of the world, not America.

"I just knew it was coming and I was just incredibly disappointed," Gates said about Trump's America First executive order.

Gates said she was looking forward to Joe Biden becoming president and bringing his "global leadership" to the White House before warning of "dark months" to come while Trump remains in office.

Later in the interview, Gates said she believes drugmakers should profit off the vaccine as a reward for shifting resources and rushing vaccine development. But Gates went on to call for "tiered pricing," with countries like the United States paying more for the vaccine than citizens of "middle-income and low-income countries."

The full interview can be found here.