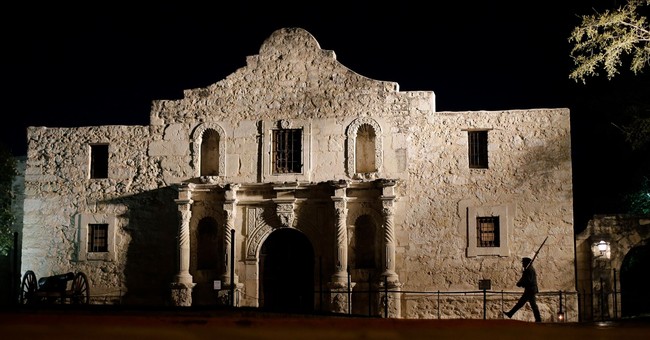 San Antonio Mayor Ron Nirenberg, a Democrat, has threatened residents with a $1,000 fine for gathering outside, even if the residents are caught in their own backyards.

The day before Thanksgiving, Mayor Nirenberg announced a curfew on outdoor gatherings that went into effect Thanksgiving Day and is set to expire on Monday, Nov. 30. Residents who object to the sudden loss of their freedom during the holiday are seizing upon the historic Alamo as a symbol of their struggle against the mayor's strict edict.

According to News 4 San Antonio, the overnight curfew lasts from 10 p.m. to 5 a.m., prohibits outdoor gatherings, including backyard gatherings, and carries a hefty $1,000 fine per day for violators caught skirting the order, implemented under the guise of slowing a surging number of Wuhan coronavirus cases.

Fox 29 reports that protesters first gathered outside the Alamo on Friday night in a show of defiance over the new curfew.

News of the curfew has seen mixed reactions from the general public but overnight Friday, several residents waving flags in support for President Donald Trump gathered at the Alamo to challenge this city-wide curfew.

One demonstrator even called out Mayor Nirenberg directly on the microphone in front of a large audience.

"Mayor Nirenberg, it's 11 p.m., we are outdoors doing a social gathering (this is illegal) I want you personally to come out here and fine me my $1,000, because guess what? I'm not even paying it anyway," the unidentified man said.

We're told residents started gathering around 11 p.m. and lasted until a little after midnight.

A group called "This Is Texas Freedom Force" is holding another protest outside the Alamo on Saturday night, starting at 10:30 p.m. or a half-hour after the curfew on gatherings takes effect.

Tonight Texans will plant our boots firmly in the ground and make it known that our constitutional rights will not be violated. https://t.co/F6pZFxPpXi

"Remember the Alamo" was the rallying cry for Texian soldiers following the massacre by Mexican troops at the Alamo Mission in present-day San Antonio in 1836.

Bexar County, which includes the city of San Antonio, announced just over 1,000 new cases on Wednesday. Throughout the course of the pandemic, 1,343 deaths in Bexar County have been attributed to the Wuhan coronavirus.

"It's an extraordinary period in time of the year when we all want to be together with our family and friends, but we know this Thanksgiving is going to have to be different," the mayor said at a press conference.

According to the mayor, the new curfew limits social gatherings outdoors and in backyards. And while people can still order meals to-go or pick up takeout curbside, the mayor's order also bans dining-in entirely during the four-day curfew.

"While most restaurants are doing a great job, and I repeat: a great job, with the cooperation of their patrons following the governor's order, there is no getting around the fact that removing your mask while indoors allows the virus to spread and that is the danger point," said Nirenberg.