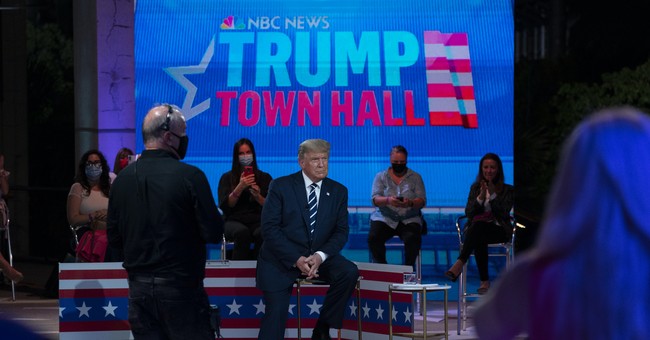 Joe Biden essentially had a 90-minute well-rehearsed campaign ad on ABC Thursday night. They called it a town hall event, but with frequent commercial breaks, almost-certainly planted questions, and former Democratic advisor George Stephanopolous hosting, it was nothing more than another in-kind contribution to the Biden campaign by the mainstream media.

Over on NBC, Savannah Guthrie considered herself a fill-in for Joe Biden and badgered Trump about white supremacists, QAnon, and the Wuhan coronavirus. Both networks had their assignments: ABC needed to make Biden look mentally competent, and NBC needed to make President Trump look like Adolf Hitler.

But NBC experienced a little snafu when it came to optics because there was a woman of color in view of the camera, nodding her head along in agreement whenever the president spoke. The View's Joy Behar called her a "bobblehead" -- maybe Joy can don blackface again and go as her for Halloween -- but the nodding woman singlehandedly threw a wrench in the liberal media's plan that night to smear the president as a racist. Liberals were so upset with the woman they immediately rushed right out and doxed her.

Her name is Mayra Joli and she is indeed a Trump supporter. Joli spoke to Real America's Voice and revealed that NBC producers had switched her from her original seat before the event to position her in view of the camera. Joli has a theory as to why NBC had her change seats.

"By the way I look, maybe they thought I may be a non-supporter because you know how it is," the woman theorized in an interview with David Brody.

The woman admitted that it was possible she may have been asked to switch seats for another reason, but there's a strong possibility NBC was playing identity politics that night and it backfired on them. How do we know this?

Well, NBC was already playing identity politics by demanding President Trump denounce white supremacy for the millionth time. The producers probably thought it was a great look to have a woman of color sitting behind the president as Savannah Guthrie, who's married to Al Gore's former Chief of Staff, slandered the president as a racist. But the identity politics backfired on them because the woman ended up being a Trump supporter and clearly agreed with what President Trump had to say.

EXCLUSIVE: Did @nbc think @JoliMayra was a democrat when they switched her to sit behind @realDonaldTrump?

SURPRISE > She's a supporter of the President! ????