Trump Supporter Killed After Shooting at 'Patriot Rally' in Denver 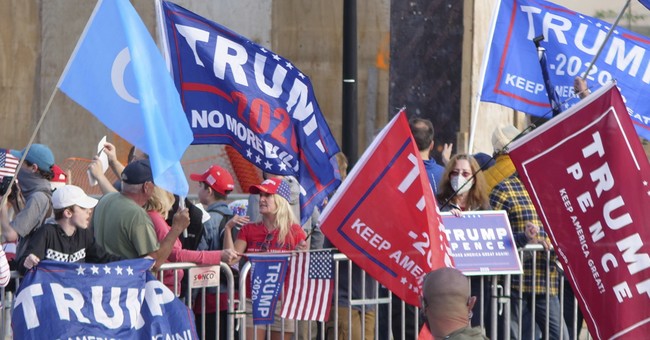 Denver Police have called into question the accuracy of a Denver Post journalist that linked the shooting of a Trump supporter on Saturday to an attendee of the BLM-Antifa riot. Denver Police say the two men currently in custody include a reporter from 9News and a private security guard contracted by the news station. The story has been updated with the latest information.

Antifa and BLM thugs showed up to a "Patriot Rally" in Denver to counter-protest the "fascists" and a Trump supporter is now dead, The Denver Post is reporting.

The Post reports that leftwing agitators showed up to a "Patriot Rally," billed as a gathering of Trump supporters, being held near Denver's Civic Center on Saturday. Police fired pepper balls at BLM-Antifa thugs after rioters attacked a barrier heading into the amphitheater.

The victim is dead and two suspects are now in custody. Police say one suspect is a private security guard accompanying a 9News reporter.

Video captured the moment gunfire erupted and police responded to the shooting.

Potato video, but here is the person shooting the gun at the #Denverprotests, and the scene after (Denver, CO) pic.twitter.com/N1FksCXWiW

Before the shooting, rioters set fire to a Thin Blue Line flag in front of a police line and hurled epithets at the officers.

An invitation for the BLM-Antifa event shows organizers planned to get as close as they could to the "fascists" and "send these worms back into their holes."

"Additionally, we will be counterprotesting a fascist rally that is supposed to happen at the same time and place!" the invitation continues. "The plan is to outnumber and outshine the fascists, set up our tables and tents in Civic Center Park, as near as we can be to the fascists! We want to send these worms back into their holes, demoralized and isolated, with only their racist, r*pist president to console them. We'll have a soup for our family, music, speakers, communist books, and plenty of angry anti-fascists chants."

Denver police say the case is now being pursued as a homicide investigation.

There are no white supremacists running around killing people but there are left-wing loons out shooting cops and Trump supporters, whether this was another case of that or not.