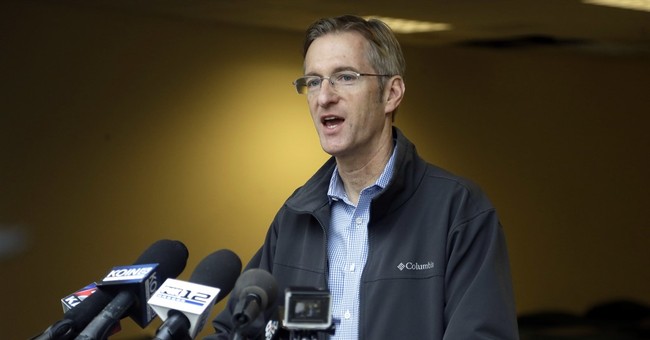 Democrats created a violent mob in Portland and now they're trying to blame it on President Trump. The city has now entered its fourth month of sustained violence.

The ink wasn't dry on Mayor Ted Wheeler's letter to the president, rudely denying Trump's offer to end the bloodshed in Portland, when a Trump supporter was murdered in cold blood Saturday night.

"On behalf of the City of Portland: No thanks," quipped the senseless mayor in response to another offer by the president to end the violence.

"In Portland, we are focused on coming together as a community to solve the serious challenges we face due to systemic racism, a global pandemic and an economic recession," the indignant mayor wrote.

Wheeler is tilting at windmills, imagining the police are the ones brutalizing people (it's Antifa), blaming Portland's collapsed economy on a recession (the rioters looted, vandalized, and burnt down all the businesses), and Wheeler can't figure out why COVID keeps spreading in the community (filthy autonomous zones and nightly mass riots sound like superspreader events).

Watch the mayor trying to pin the death of a Trump supporter on Trump:

Portland, Oregon, Mayor Ted Wheeler blames President Trump for the ongoing riots. Yet on Friday, he wrote a letter to the president refusing federal help.pic.twitter.com/pTIjSMRhJF

Wheeler's argument is that Portland can't accept Trump's offer to end the violence because Trump is mean on Twitter and said rude things about John McCain. Since the Democrats' hatred for the president is overriding, Portlanders will just have to get used to all the murder and mayhem in the streets.

Echoing the mayor's sentiments, Democratic presidential candidate Joe Biden put out a statement on Sunday. After finally denouncing the violence, Biden accused the president of "fanning the flames of hate and division in our society and using the politics of fear to whip up his supporters."

Does Biden think the Trump supporter shot himself? Does he think Antifa, Black Lives Matter rioters, and other leftwing agitators committing violence for months are all Trump supporters? Does clueless Joe even know what he's talking about? The Democrats are really hoping their media allies can spin them out of this mess, and they'll definitely try.

The Democrats are scrambling because they created and fueled a violent mob that continues to destroy American cities and is becoming only more violent as Democrats and the media cover up the mob's violence and justify its behavior.