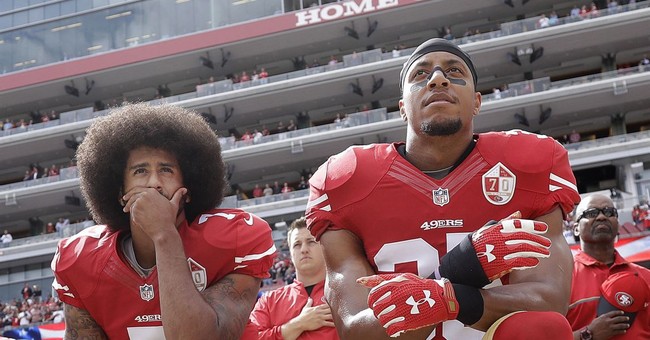 Brett Favre infuriatingly compared Colin Kaepernick to national hero Pat Tillman, the patriot who honored the flag, willingly walked away from a multi-million-dollar football contract, and died serving his country.

"It's not easy for a guy his age -- black or white, Hispanic, whatever -- to stop something that you've always dreamed of doing, and put it on hold, maybe forever, for something that you believe in," Favre told TMZ.

"I can only think of right off the top of my head, Pat Tillman is another guy that did something similar," Favre said. "And, we regard him as a hero. So, I'd assume that hero status will be stamped with Kaepernick as well."

Favre clearly took one too many blows to the head during his football days.

Kaepernick showed no courage, no gratitude, and no respect for the nation that made him a millionaire when he chose to kneel in protest during the national anthem. He didn't choose to put anything on hold because a.) he sucks and no football team wants him, and b.) he didn't quit anything to kneel; in fact, he could only get attention for kneeling while playing professionally. Nowadays, Kaepernick begs football teams to hire him and helps Nike sell overpriced, hundred-dollar shoes to the very people that Kapernick says suffer from inequality.

"The cries for peace will rain down, and when they do, they will land on deaf ears, because your violence has brought this resistance," Kaepernick tweeted.

Even unemployed, Kapernick would never fight for his country. If he did fight, he'd surely join the terrorists.