BET Founder: Biden Should Apologize to Every Black Person He Meets 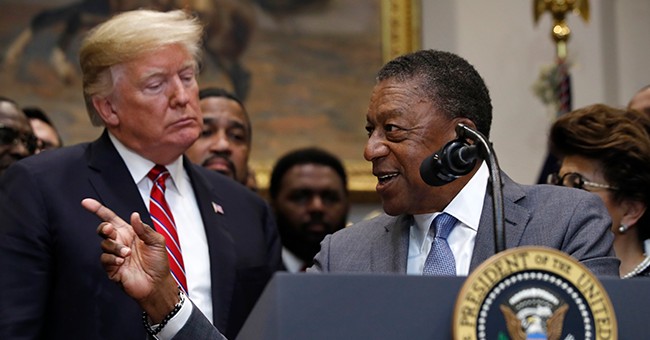 BET founder Robert Johnson is one of many black Americans who took offense to Joe Biden's assertion that blacks who vote for Trump really "ain't black." On Twitter, Fox News’s Bret Baier shared a statement from Johnson that included some sharp criticism of the former vice president's comments and some advice on how the candidate should spend the remainder of his campaign.

Statement by Robert L. Johnson, founder of Black Entertainment Television & RLJ Companies.
“VP Biden’s statement today represents the, arrogant and out-of-touch attitude of a paternalistic white candidate who has the audacity to tell Black people, the descendants of slaves,1/2

2/2 Statement by Robert L. Johnson, founder of Black Entertainment Television “that they are not Black unless they vote for him. This proves unequivocally that the Democratic nominee believes that Black people owe him their vote without question; even though,1/3

Statement by Robert L. Johnson, founder of Black Entertainment Television and The RLJ Companies. “we as Black people know it is exactly the opposite. He should spend the rest of his campaign apologizing to every Black person he meets.”

The former vice president apologized for the comments he made during an interview on The Breakfast Club radio show Friday morning. Biden told host Charlamagne Tha God, “[i]f you have a problem figuring out whether you're for me or Trump, then you ain't black."

In an interview in Nov. 2019, Robert Johnson called the 2020 election Trump's to lose and encouraged Democrats to focus on substance instead of style when criticizing the president.

“I think the president has always been in a position where it’s his to lose, based on his bringing a sort of disruptive force into what would be called political norms," Johnson said. "I don’t care whether it’s his way he conducts foreign policy, the way he takes on the government agencies and what they do with immigration. He brings his style."

In an interview in Apr. 2018, Johnson credited President Trump for bringing blacks back into the workforce (pre-coronavirus) and, in 2013, faulted then-President Obama for the stubbornly high black unemployment levels that persisted throughout the Obama/Biden administration.