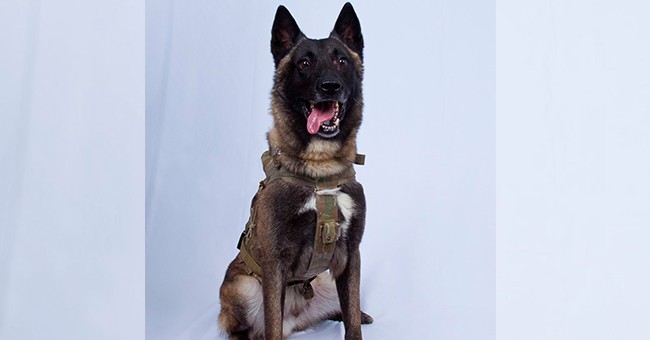 President Trump wants to give the Purple Heart to Conan, the dog injured during the takedown of ISIS leader Abu Bakr al-Baghdadi. “It is the president’s desire to honor the dog," a source told the New York Post. "They are working out the details.”

The dog is undoubtedly a hero, and demand for the dog's breed has skyrocketed following Conan's rise to national prominence. But as The New York Post notes, two things are getting in the way of President Trump's desire to honor the dog. First, the dog keeps working, probably on very important missions. And second, dogs are not currently allowed to receive the Purple Heart.

But President Trump isn't one to let technicalities get in the way of doing something important. As Laura Trump, the president's daughter-in-law and senior advisor, recently wrote, "The whole episode reveals something about my father-in-law, our president, that his supporters have always understood, but which his detractors have never really been able to comprehend. There’s a certain irreverent, populist 'realness' to Donald Trump’s much-maligned Twitter account and off-the-cuff remarks to the press. His down-to-earth style is out of place in the Washington, D.C. swamp-world of uptight professional politicians, but that’s exactly what makes him so appealing to regular people."

Conan is already a hero in the hearts and minds of many Americans. Just maybe not at The Washington Post. After the Daily Wire published an apt and obviously photo-shopped meme of the president honoring Conan with a medal, an indignant Post decided to fact-check the meme.

Thank you Daily Wire. Very cute recreation, but the “live” version of Conan will be leaving the Middle East for the White House sometime next week! https://t.co/Z1UfhxsSpT

In The Washington Post's defense, they seemed unhappy about the terrorist's death in general. The Washington Post's headline that day, "Abu Bakr al-Baghdadi, austere religious scholar at helm of Islamic State, dies at 48," made it seem like some professor quietly passed away from natural causes.