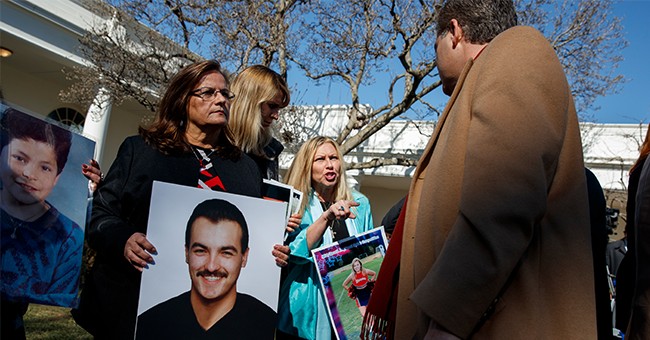 A federal judge ruled on Tuesday that the government must provide mental health services for thousands of migrant families that were separated under the Trump administration's "zero-tolerance policy," The New York Times has reported.

John A. Kronstadt, a U.S. District Court judge in Los Angeles, decided the federal government must immediately provide mental health screenings and treatment to migrant families separated while the policy was in effect.

The Angel Moms, whose children have been killed by illegal aliens, were not happy with his ruling.

What about Angel Families and the PERMANENT LOSS, PERMANENT SEPARATION ?!! Our liberal courts, government and politicians don’t give a damn about their fellow American citizens. It’s all about ILLEGALS https://t.co/DhlkTRZrX6

Angel Mom Sabine Durden, a legal immigrant, lost her son Dominic after an illegal immigrant with a record of drunk driving crashed into her son's motorcycle. The illegal immigrant only spent about 35 days in jail before being deported back to Guatemala. Durden has become a vocal advocate for victims of illegal-immigrant crime.

I am so angry right now. ??????
Myself & the many other Angel-parents I know, can’t get help with the horrific anxiety/ depression we suffer, yet ILLEGALS r AGAIN more important than American citizens who suffered because of illegals@POTUS @realDonaldTrump PLEASE FIGHT THIS !!!! https://t.co/6rGzz1WjCI

Angel Mom Mary Ann Mendoza lost her son, Sgt. Brandon Mendoza, when an illegal alien drunk driver, who was also high on drugs, killed her son in a head-on collision.

??THIS IS BS! What about @AngelFamilies?! A federal judge has ruled that the govt must provide mental health serv to thousands of ILLEGAL parents & children who experienced psychological harm as a result of the Trump admin practice of separating families. https://t.co/wU2V7irjTp

What about Angel Families permanently separated! My family had to pay for our own counseling, our daughter's funeral & everything else that came with our tragic loss. When will American Citizens be treated better than illegal aliens? ?????? https://t.co/5yD6FdxBP8

"Angry doesn't even cover how I feel right now," Angel Mom Virginia Krieger said after the ruling. Krieger also wondered where the services were for American families who are now separated from their children forever.

WHERE ARE THE SERVICES FOR AMERICAN FAMILIES WHO HAVE BEEN SEPARATED FROM OUR CHILDREN FOREVER?!

THE DEMOCRATS CAUSED OUR CHILDREN'S DEATHS

NOW THEY WANT US TO SPEND OUR MONEY TO SUPPORT THEIR KILLERS!

ANGRY DOESN'T EVEN COVER HOW I FEEL RIGHT NOW!https://t.co/nU9h2NNP4w

From October 2017 to February 2018, DHS reported a 315 percent increase in the number of cases involving adults using minors to fraudulently pose as family members in order to gain entry into the United States. After mounting pressure, President Trump signed an executive order ending the zero-tolerance policy back in June 2018.