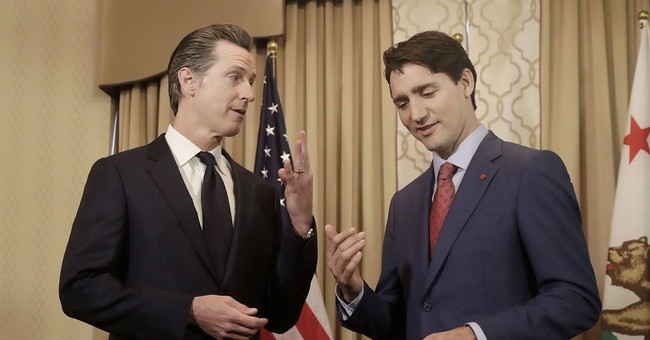 The United States is suing the state of California over its cap-and-trade agreement with the Canadian province of Quebec. In 2013, California and Quebec entered into an agreement to lower carbon emissions and merge carbon markets.

In a press release, the U.S. Justice Department alleges that California and agencies involved "have pursued or are attempting to pursue an independent foreign policy in the area of greenhouse gas regulation. The Constitution prohibits states from making treaties or compacts with foreign powers, yet California entered into a complex, integrated cap-and-trade program with the Canadian province of Quebec in 2013 without congressional approval."

California has been a leader in setting emission standards nationwide, with many states adopting California's standards on cars and trucks. In September, the Trump administration announced it was planning to revoke California's Clean Air Act waiver for greenhouse gases, citing concerns about cost and safety for consumers. The waiver allows California to set tougher emission standards than those mandated by the federal government.

Wednesday's press release states that "California has veered outside of its proper constitutional lane to enter into an international emissions agreement.  The power to enter into such agreements is reserved to the federal government, which must be able to speak with one voice in the area of U.S. foreign policy,” said Assistant Attorney General Jeffrey Bossert Clark of the Justice Department’s Environment and Natural Resources Division. “California’s unlawful cap-and-trade agreement with Quebec undermines the President’s ability to negotiate competitive agreements with other nations, as the President sees fit.”

During his presidency, Trump has sought to increase the use of fossil fuels while rolling back climate change regulations that negatively impact the U.S. economy. In June 2017, President Trump announced the U.S. would withdraw from the Paris Agreement on climate change that was entered into by the Obama administration. The Paris Agreement would negatively impact the U.S. economy by raising energy prices while also decreasing jobs, wages and GDP.