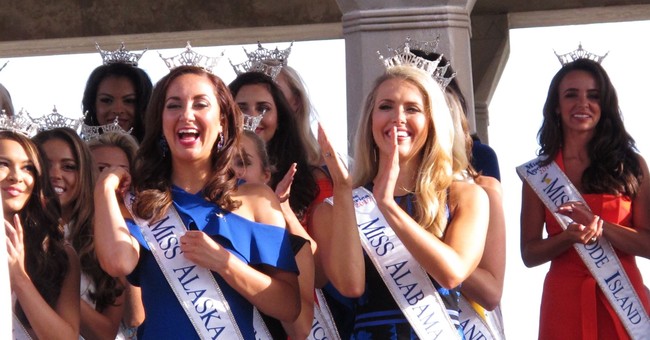 Just this morning, it was announced that the annual Miss America Pageant will no longer hold its iconic swimsuit competition.

What’s more, the evening gown portion of the night is also being axed this year. Instead, contestants will wear an outfit in keeping with their own personal style, and there will be additional live interaction time with the judges.

On Tuesday morning’s installment of GMA, Gretchen Carlson (who presently chairs the board for the Miss America Organization) told Amy Robach that “We are no longer a pageant. We are a competition.”

This is clearly a departure for the historic pageant, long known for its bathing suits, sequins, and big hair-dos. But Ms. Carlson is optimistic. "We’ve heard from a lot of young women who say, ‘We’d love to be a part of your program but we don’t want to be out there in high heels and a swimsuit,’ so guess what, you don’t have to do that anymore. Who doesn’t want to be empowered, learn leadership skills and pay for college and be able to show the world who you are as a person from the inside of your soul.” Carlson added, “That’s what we’re judging them on now."

Gretchen Carlson’s own background may shed further light on the surprising decision. A former Miss America herself, she co-hosted Fox and Friends for eight years. Once her contract ended, however, Carlson filed (and eventually settled) a lawsuit against former Fox News chairman Roger Ailes, and has since been an outspoken advocate against sexual harassment.

This is also the first time the Miss America Organization’s top three leadership positions are all simultaneously held by women. The shakeup in leadership came late last year, as the result of a scandal in which leaked emails from former Miss America CEO Sam Haskell were released to the Huffington Post. Those emails included purportedly lewd, critical remarks about the appearance, intelligence, and personal lives of a number of former Miss America winners, including Ms. Carlson. Sam Haskell resigned, along with two other top-level executives, while maintaining the Huffpo story was both unkind and untrue.

In the post “me too” era, more and more institutions are looking to better empower and protect women. Truth be told, that’s probably not such a bad thing. Who can deny the inconsistency of a competition that has women parading around in scanty swimwear, with the goal of winning a scholarship and making America a better place? When it comes to entertainment in general, many conservative television viewers have long demanded less skin and more family-friendly substance. And, if women hope to be taken seriously, particularly when it comes to issues related to sexual harassment, it probably makes sense to rethink certain aspects of such a pageant.

At any rate, Gretchen Carlson certainly seems to think so. “We are now open, inclusive and transparent,” she says, “and I want to inspire thousands of young people across this country to come and be a part of our program.”