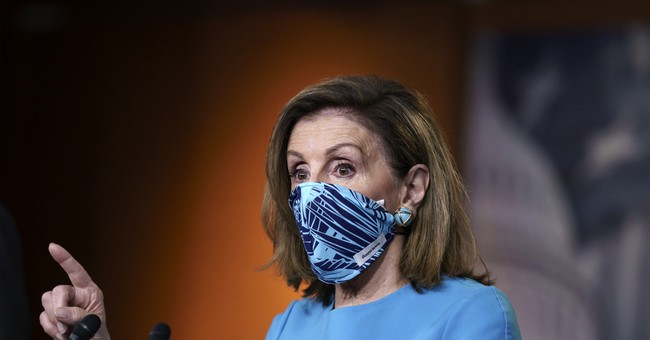 House Speaker Nancy Pelosi (D-CA) on Sunday called the illegal immigration crisis at the southern border a "humanitarian challenge" that the Biden administration is attempting to resolve. The comments come after El Paso Congresswoman Veronica Escobar visited the border on Friday and sounded the alarm on the conditions unaccompanied minors are being held in.

"The facts of these are more children, about 600, 700 more children, unaccompanied children, coming over the border. This is a humanitarian challenge," Pelosi told ABC News' George Stephanopoulos. "What the [Biden] administration has inherited is a broken system at the border and they're working to correct that in the children's interest."

"I'm so pleased that the president has sent, as a temporary measure, has sent FEMA to the border to help facilitate the children going from one facility into where they are cared for until they are transferred into family homes or homes that are safe for them to be," the speaker explained.

According to Pelosi, illegal aliens are crossing the border in hopes of finding work. She cited corruption in Mexico and "climate change" in the Northern Triangle – El Salvador, Guatemala and Honduras – that makes farming almost impossible, as reasons the migrants make the trek to the United States.

The speaker said the Refugee Resettlement Program, which provides protections to refugees from a third country, is considered "the crown jewel of American humanitarianism." She also mentioned that there are asylum seekers flocking to the southern border.

House Speaker Nancy Pelosi calls the surge of migrant children crossing the Southern border "a humanitarian challenge," adding that the Biden administration has inherited a "broken system at the border." https://t.co/UNXhabLMfs pic.twitter.com/on69lT7LLX

Pelosi's statements are riddled with errors. FEMA was deployed to the southern border because a facility for unaccompanied minors soared to 729 percent capacity. As a result, many are going five-plus days without a shower and, even then, basic necessities, like soap, are nonexistent. That's a health concern in general. Throw COVID on top of it and these facilities are a breeding ground for COVID infections and another outbreak.

If someone is seeking asylum they legally have to show up to an official port of entry to begin that process. They cannot illegally cross the border and say they're seeking asylum. Once they make that trek and go the illegal route, asylum protections are thrown out the window.

While the Refugee Resettlement Program is nice to point to, this has absolutely nothing to do with the crisis at the border. The resettlement program is designed to take in those who fleed their home country and found shelter as a refugee in another country. They then request to come to the United States as a refugee, with the protections that come with being deemed a refugee in America. Again, there are legal channels for this and they don't include illegally coming into the U.S.

The crisis at the border is taking place for a handful of reasons. President Biden refuses to say the border is closed. It didn't help that one of Biden's immigration advisers, former Ambassador to Mexico, Roberta Jacobson accidentally said the "border is not closed." Couple that with executive action he took halting deportations for the first 100 days, something he promised before inauguration day, and pulling funding from the border wall.

President Biden has metaphorically said the United States' southern border is open. And it's why people are flocking to America before Biden's first 100 days are up.

Spencer Brown
DHS Warns of Leftist Violence Once Roe v. Wade Is Overturned
Julio Rosas
What to Expect From the First Durham Probe Trial
Mia Cathell
How AP Frames Who's to Blame for the Issues of the Day Is Definitely Noticed
Rebecca Downs
Rubio Forces NIH to Admit There’s No Conclusive Data on the Impact of Puberty Blockers on Children
Madeline Leesman
College Professor Makes Wild Claim About How Many People Are Killed By White Supremacists
Julio Rosas
CARTOONS | Al Goodwyn
View Cartoon
Most Popular