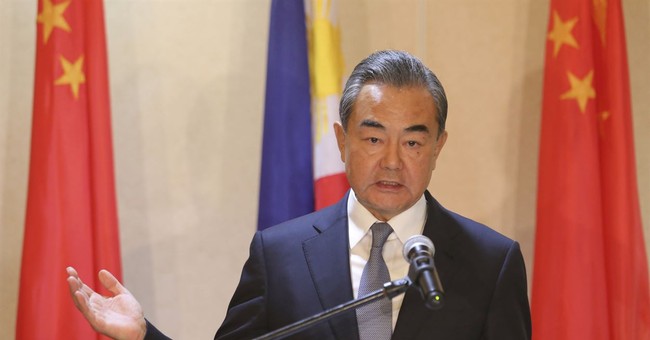 The Chinese Communist Party is demanding President Joe Biden roll back former President Donald Trump's policy of supporting Taiwan, a democratic island China claims as their own. According to Chinese Foreign Minister Wang Yi, Trump's support of Taiwan is a "dangerous practice" that the United States must move away from.

The fight between Taiwan and China goes back to the 1940s. Taiwan broke from mainland China in 1949 and established a democratic society. The Chinese Communist Party, however, still attempts to impose rules and regulations on the island.

During a press conference on Sunday, Wang said China's claim on Taiwan is an "insurmountable red line" that the Chinese government refuses to back away from, the Associated Press reported.

“The Chinese government has no room for compromise,” Wang said. “We urge the new U.S. administration to fully understand the high sensitivity of the Taiwan issue” and “completely change the previous administration’s dangerous practices of ‘crossing the line’ and ‘playing with fire.”

China is continuing to assert its dominance over other territories. Their fight to keep Taiwan under their thumb comes after Hong Kongers demanded their autonomy and civil liberties be respected.

“No one cares more about the development of democracy in Hong Kong than the central government,” Wang said, claiming Hong Kongers' "rights" would be protected.

It's unclear what action the CCP will take if Biden refuses to roll back the informal policy of supporting Taiwan, although the party has threatened to invade the island if Taiwan attempts to declare formal independence.

Tensions between China and Taiwan have heightened over the last year-and-a-half because of the Wuhan coronavirus pandemic. Taiwanese health officials alerted the WHO about the Wuhan coronavirus' transmission between humans back in Dec. 2019, but the organization failed to alert countries around the world.

Throughout the pandemic, the WHO has parroted the CCP's talking points and even went so far as to praise China's leadership. To make matters worse, the WHO has prevented Taiwan from having a seat at the international table since 2016 because of China's beef with the island.

The last thing Americans want, especially as we continue to fight the coronavirus, is to provide any favors to the CCP. They repeatedly lied about what was taking place. As a result, the world is still grappling with the virus that has taken far too many lives.