Trump's Physician Reveals When Trump Could Be Released From Walter Reed 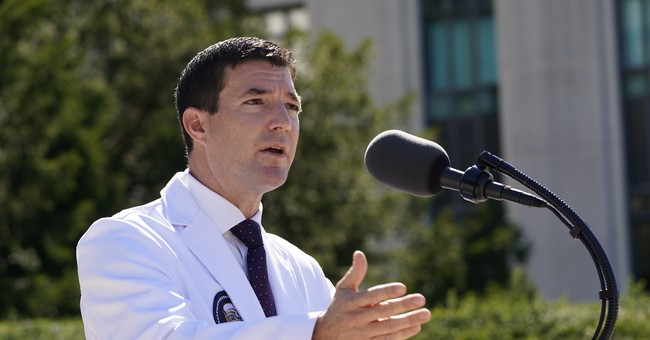 The doctors at Walter Reed Medical Center on Sunday offered an update on President Donald Trump's battle with the Wuhan coronavirus.

According to Dr. Sean Dooley, Trump continues to improve.

"He has remained without fever since Friday morning. His vital signs are stable. From a pulmonary standpoint he remains on Remdesivir and is not complaining about shortness of breath, or other significant respiratory symptoms," Dooley said during Sunday's press conference.

The president continues to walk around the White House Medical Unit "without limitation or disability."

Because of how well he is doing, Trump is likely to be discharged in the next couple of days, but as early as tomorrow.

"Today, he feels well. He's been up and around. Our plan for today is to have him eat and drink, be up and out of bed as much as possible, to be mobile," Dr. Brian Garibaldi explained. "And if he continues to look and feel as well as he does today, our hope is that we can plan for a discharge, as early as tomorrow, to the White House, where he can continue his treatment course."

Doctor Brian Garibaldi: “Our hope is to plan for a discharge as early as tomorrow to the White House, where he can continue his treatment course." pic.twitter.com/3D72wnZZ1Z

Saturday night President Donald Trump released a video message from inside Walter Reed. He offered his gratitude to the medical professionals and thanked the American people for sending their prayers and well wishes his way.

The president said he hopes to be back to normal fairly soon, although he didn't give a definitive timeframe. He also said he plans to end the campaign the same way it began.

He sent well wishes from First Lady Melania Trump. The president said she's handling things better than he is she's significantly younger than him, which is how the Wuhan coronavirus statistically works.