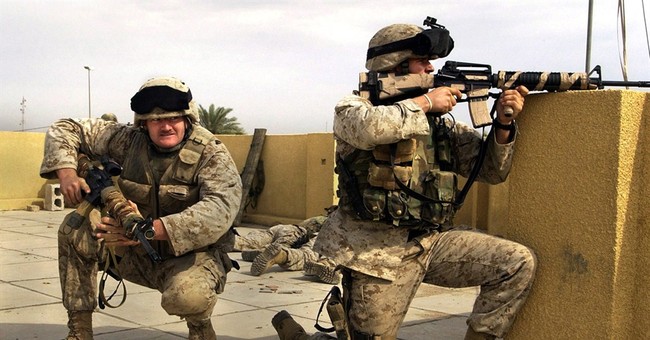 According to the anonymous source that spoke to the Times, the Russians intending "to destabilize the West or take revenge on turncoats, had covertly offered rewards for successful attacks last year."

The source claimed that President Donald Trump and Vice President Mike Pence were briefed on the situation and the National Security Council discussed it back in March.

Dmitry Peskov, the Press Secretary for Russian President Vladimir Putin, said the country had no diplomatic complaints on record.

“If someone makes them, we’ll respond,” Peskov told the Times.

In the Times' piece, the Taliban's spokesman, Zabihullah Mujahid, said the terrorist organization had no "such relations with any intelligence agency." He labeled the accusation as an attempt to "defame" the group.

“These kinds of deals with the Russian intelligence agency are baseless — our target killings and assassinations were ongoing in years before, and we did it on our own resources,” Mujahid explained. “That changed after our deal with the Americans, and their lives are secure and we don’t attack them.”

The most telling part of the article included absolutely zero details:

The officials spoke on the condition of anonymity to describe the delicate intelligence and internal deliberations. They said the intelligence had been treated as a closely held secret, but the administration expanded briefings about it this week — including sharing information about it with the British government, whose forces are among those said to have been targeted.

The intelligence assessment is said to be based at least in part on interrogations of captured Afghan militants and criminals. The officials did not describe the mechanics of the Russian operation, such as how targets were picked or how money changed hands. It is also not clear whether Russian operatives had deployed inside Afghanistan or met with their Taliban counterparts elsewhere.

So this information is based on an anonymous source yet there are no details about how the operation took place, what American troops were targeted, how meetings were conducted or even how the Taliban received their so-called payments. Why are there no details?

According to the president, he, the vice president and the chief of staff were never briefed about this operation. Trump labeled the story as "fake news"

Nobody briefed or told me, @VP Pence, or Chief of Staff @MarkMeadows about the so-called attacks on our troops in Afghanistan by Russians, as reported through an “anonymous source” by the Fake News @nytimes. Everybody is denying it & there have not been many attacks on us.....

...Nobody’s been tougher on Russia than the Trump Administration. With Corrupt Joe Biden & Obama, Russia had a field day, taking over important parts of Ukraine - Where’s Hunter? Probably just another phony Times hit job, just like their failed Russia Hoax. Who is their “source”?

Director of National Intelligence, John Ratcliffe, said he confirmed that Trump and Pence weren't briefed on the allegations.

Statement by DNI Ratcliffe: "I have confirmed that neither the President nor the Vice President were ever briefed on any intelligence alleged by the New York Times in its reporting yesterday." (1/2)

"The White House statement addressing this issue earlier today, which denied such a briefing occurred, was accurate. The New York Times reporting, and all other subsequent news reports about such an alleged briefing are inaccurate.” (2/2)

I never heard this. And it’s disgusting how you continue to politicize intelligence. You clearly don’t understand how raw intel gets verified. Leaks of partial information to reporters from anonymous sources is dangerous because people like you manipulate it for political gain. https://t.co/403X9AVGAC

The Russian Embassy in the United States also denied the story.

In the absence of reasons to #BlameRussians, @nytimes is there to invent new fake stories.@mschwirtz @EricSchmittNYT @charlie_savage obviously lack information on cooperation between Russia and #US on the Afghan peace process, on Syrian, North Korean, Venezuelan, Iranian agendas pic.twitter.com/tqO7hVRVGv

Earlier this year the United States and the Taliban were in peace talks. American troops were supposed to be scaled back in Afghanistan, if the Taliban committed to a long-term ceasefire if violence reduction requirements were met. Talks stalled because of the Taliban's multiple attacks on the American military.