Why Colin Powell Is Throwing His Support Behind Joe Biden 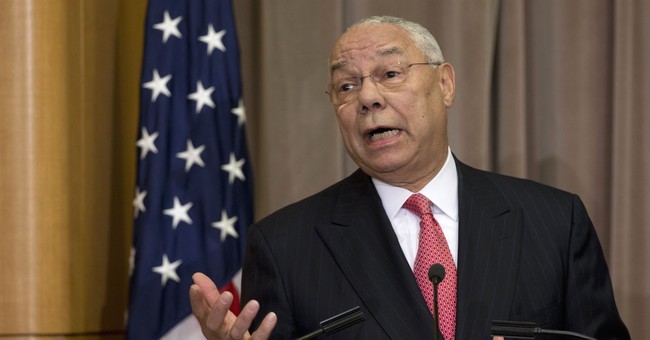 Former Secretary of State and retired four-star General Colin Powell on Sunday announced his intent to vote for former Vice President Joe Biden in November. According to Powell, President Donald Trump's actions throughout the George Floyd protests reinforced his support for Biden.

Powell said he agreed with an opinion piece from 89 former Defense officials, including generals and admirals, who believe President Trump's use of the military to rein in rioting and looting across the country was wrong.

"I’m very happy with what General Allen said and all the other generals, admirals are saying, [what] diplomats are saying. We have a Constitution. We have to follow that Constitution. And the president’s drifted away from it. I’m so proud of what these generals and admirals have done and others have done. But, you know, I didn’t write a letter because I made my point with respect to Trump's performance some four years ago when he was running for office," Powell told CNN's Jake Tapper on Sunday. "When I heard some of the things he was saying, he made it clear I could not vote for this individual."

"The first thing that troubled me is the whole Birther Movement. The Birther Movement had to do with the fact that the President of the United States, President Obama, was a black man. That was part of it. And then I was deeply troubled by the way in which he was going around insulting everybody. Insulting gold star mothers, insulting John McCain, insulting immigrants – and I’m a son of immigrants – insulting anybody who dared to speak against him," the former secretary of state explained. "And that is dangerous for our democracy, it is dangerous for our country, and I think what we’re seeing now, those massive protest movements I have ever seen in my life, I think this suggests the country is getting wise to this and we’re not going to put up with it anymore."

Powell said he agrees with former Defense Secretary James Mattis who has said Trump continually divides the American people. Collin cited the border wall as a divide between Americans and immigrants and warned that Trump's division is having a negative impact on America's foreign policy and allies around the world.

“We have a Constitution and we have to follow that Constitution and the President has drifted away from it,” Former US Secretary of State Colin Powell says he agrees with fellow former generals who have condemned President Trump’s actions against protesters. #CNNSOTU pic.twitter.com/Uni950ct8i

Powell went on to say he would not be supporting Trump's re-election in November. Instead, he was throwing his support behind former Vice President Joe Biden.

"We are at a turning point. The Republican Party, the president, thought they were sort of immune, that they could say anything they wanted and, even more troubling, the Congress would just sit there, and not in any way resist what the president is doing," Powell explained. "And there's one word I have to use with respect to what he's been doing the last couple years – is a word I would never have used before – I never would have used with the four presidents I worked for, he lies. He lies about things and he gets away with it because people will. not hold him accountable."

The retired general said he was displeased when he saw Congress refuse to address what was taking place. He reiterated that there are three branches of government – the executive, the Congress and the judicial – and not just the presidency.

"Most of all we have the people of the United States, the ones who vote, the ones who vote him in and vote him out," Powell explained. "I couldn't vote for him in [2016] and I certainly cannot, in any way, support President Trump this year."

Tapper followed up by asking Powell if he would be voting for Biden.

"I'm very close to Joe Biden, in a social manner and in a political manner. I've worked with him for 35, 40 years and he is now thee candidate and I will be voting for him," the retired general said.

Former Secretary of State Colin Powell says he will be voting for former Vice President Joe Biden. “I certainly cannot, in any way, support President Trump this year.” #CNNSOTU pic.twitter.com/jmiUfDPhl1

President Trump took to Twitter to respond to Powell.

Colin Powell, a real stiff who was very responsible for getting us into the disastrous Middle East Wars, just announced he will be voting for another stiff, Sleepy Joe Biden. Didn’t Powell say that Iraq had “weapons of mass destruction?” They didn’t, but off we went to WAR!