Tom Steyer Drops Out of the Democratic Primary 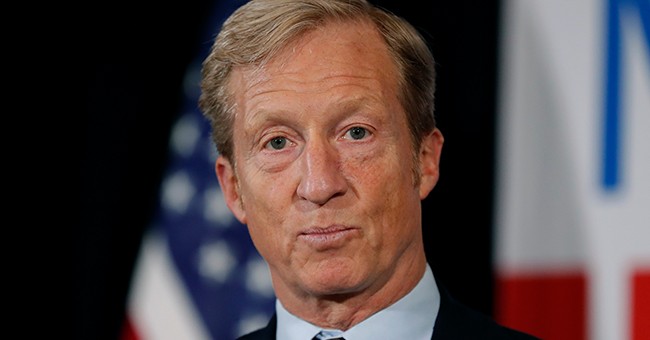 Despite spending an incredible amount of time and money in South Carolina, it just wasn't enough for billionaire Tom Steyer to come out victorious. The climate change activist spent nearly $24 million on ads and direct mailers. Even with that kind of money behind him, Steyer sat at an abysmal 11 percent with more than 56 percent of precincts reporting.

After former Vice President Joe Biden was deemed the winner in South Carolina with roughly 49 percent of the vote, Steyer decided to end his campaign for the Democratic nomination.

Although the billionaire is no longer in the running for the Democratic nomination, Steyer said he would absolutely support whoever the Democrats choose as their nominee.

"I've said from the beginning, every Democrat is a million times better than Trump. Trump is a disaster," the climate change activist told a crowd of supporters Saturday night. "And let me say this: I mean, we're in South Carolina. Lindsey Graham's a disaster. He's a disaster for the people here, so of course, I'm going to be working on that."

Tom Steyer says he will "of course" keep working on defeating President Trump, even after ending his campaign: "Every Democrat is a million times better than Trump. Trump is a disaster." https://t.co/h0N1pR80WS pic.twitter.com/NlA0ndpYHp

He also told supporters that "when the Lord closes a door, he opens a window. I will find that window and crawl through it with you. I promise you that."

Steyer went on to say that meeting with the American people has been "the highlight of my life."

Tom Steyer's closing remarks to supporters after ending his presidential campaign: "When the Lord closes a door, he opens a window. I will find that window and crawl through it with you, I promise you that." https://t.co/h0N1pR80WS pic.twitter.com/3Zw2axc8Hv