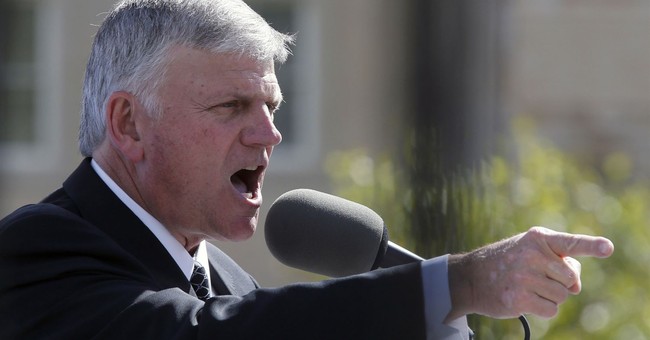 Christianity Today, a magazine founded by prominent evangelist Billy Graham, on Thursday penned an editorial explaining why they believe President Donald Trump should be impeached and removed from office. The editorial board decided to use Graham's name to call for Trump's impeachment, even though the Graham family has not been involved with the publication in years.

The gist of the opinion piece was simple: they took issue with Trump's personality, not necessarily his actions relating to Ukraine. They claim to typically try to "stay above the fray" and allow Christians to come to their own determination about politics so all are welcome but felt compelled to speak out because "the impeachment hearings have illuminated the president’s moral deficiencies for all to see."

President Trump responded on Twitter, calling the publication "a far left magazine" that "would rather have a Radical Left nonbeliever, who wants to take your religion & your guns, than Donald Trump as your President."

The most interesting aspect, however, came from Franklin Graham, Billy Graham's son. In a Facebook post, the younger Graham revealed that his father voted for President Trump and "would not agree with their opinion piece."

"In fact, he would be very disappointed," Franklin Graham wrote in his post. "I have not previously shared who my father voted for in the past election, but because of this article, I feel it is necessary to share it now. My father knew Donald Trump, he believed in Donald Trump, and he voted for Donald Trump. He believed that Donald J. Trump was the man for this hour in history for our nation."

Graham noted that not one single Republican member of the House voted for the articles of impeachment, something he said they would have done if Trump was guilty of committing the crimes they claim he did, especially because he knows "many of them are strong Christians."

A day later, Graham then shared a picture of him and his wife, Jane Cunningham Graham, with Vice President Mike Pence and Second Lady Karen Pence at the White House, thanking them for a "wonderful night in Washington."

Thank you @VP @Mike_Pence and @SecondLady Karen Pence for a wonderful night in Washington. We are grateful for all you do for this country—and you’re in our prayers. pic.twitter.com/fxZxVgEzzf

If Christianity Today takes issue with what President Trump has done, is doing or plans to do, fine. They have that right. They can voice their opinion. It just means they're going to alienate a large portion of their readership. They shouldn't, however, invoke Billy Graham's name in the conversation, especially if the Graham family hasn't been involved in the publication in years and the editors have no working knowledge of Billy Graham's personal political feelings.