Mexico Put Their Money Where Their Mouth Is When It Comes To Illegals Flocking To The U.S. 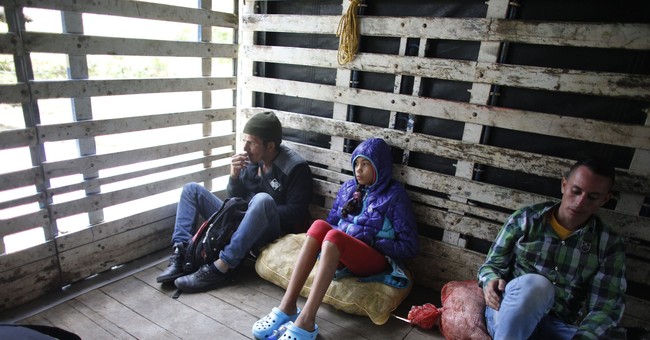 Mexican President Andrés Manuel López sent 6,000 troops to the country's southern border to help keep illegal aliens from flocking to the United States. Those troops are now rounding up illegal aliens who have jumped on a freight train headed to the United States' southern border. The train, referred to as "The Beast" – "La Bestia" in Spanish – was stopped near Tuxtla Gutiérrez, Chiapas, just north of the Mexico-Guatemala border, the Washington Examiner reported.

"The National Guard was placed on one side, moment that was taken advantage of by more than 200 migrants who got off the train and fled," Nataniel Hernández Núñe, director of the Digna Ochoa Human Rights Center, told El Universal.

Man of the train's riders hid in the brush, which resulted in only 25 arrests.

The train was expected to head to Oaxaca, to the northwest. At that point the illegals would have to change trains to continue towards the United States.

Illegal aliens haven't relied on freight trains for transportation to the United States since 2014 and 2015 when family units began relying on them to avoid utilizing coyotes. Although Mexican authorities made it illegal to ride the freight trains, officials failed to enforce the policy...until now.

Now that Mexico came to an agreement with President Trump to make an effort to keep illegal aliens from flocking to the United States' border, Mexican officials are now enforcing the 2014 law.

According to Mexico's Institute for National Migration, anyone who illegally enters the country without temporary travel visas will be deported back to their home country.

Those who choose to utilize the freight trains have multiple route options for where they'd like to end up on the United States-Mexico border.

The freight train map below is what illegal aliens have relied on for more than a decade, the Examiner reported.

This is a map illegal aliens use to travel via freight train to the United States' southern border. The information is from a report called "The challenges of migration in Mexico. A two-sided mirror." Economic Commission for Latin America and the Caribbean pic.twitter.com/ZL1u8Y6p27