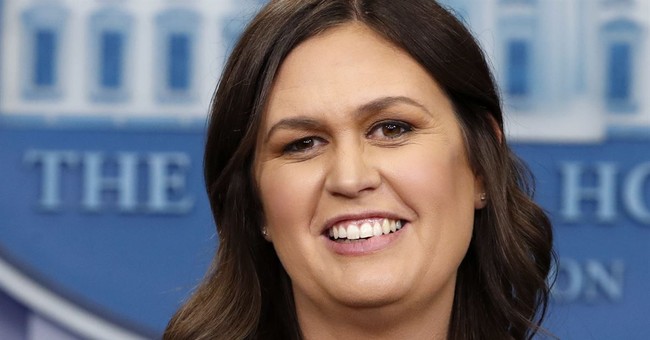 One of the people on the "Mueller Madness" bracket, Richard Painter, responded by telling Sanders to "put up or shut up." He seems to think this is "blasting him on Twitter," even though she wasn't the one who made the bracket in the first place.

Hey @PressSec: before you go blasting me like this on Twitter you need to put up or shut up. Tell AG Barr to release the Mueller Report so we can see the evidence instead of just what he and you say about it. Until then do the Country a favor and put a lid on it. https://t.co/g5Fg6lCqU9

Huckabee Sanders responded by reminding people of how wrong the leftist media has been in this whole saga:

How many times do the Democrats and their liberal media allies have to be proven embarrassingly wrong about @realDonaldTrump before they finally accept he’s been a great President? https://t.co/XRWTmg9d2O

And a few conservatives completely agreed with her.

Such goodness. . . And @PressSec, congrats on the last 2 yrs. Seriously. You had to deal with a rapid, foaming at the mouth MSM who were peddling conspiracy theories and every day you more than held your own. https://t.co/8QRz2hU5wk

Mueller Madness! Which of the angry and hysterical @realDonaldTrump haters got it most embarrassingly wrong? #YouDecide pic.twitter.com/IkzUesDdub

Naturally, liberals were triggered by the post. They made the assumption she wasted taxpayer money and resources to create the bracket.

I’m sad I didn’t make this White House list because I really hate the corruption and lying in this administration, but I’m proud of @NatashaBertrand, who has made her mark early in life.

Just when you thought you couldn't be more unprofessional...

I miss having respectable professionals in the White House.

omg don’t you have any real work to do, like lying to the American people?

Sarah must have a lot of free time only giving press briefings every 40 days.

This is awesome! When we’re done with this, can we do one with 68 bible verses that you and your family conveniently toss out the window when it serves your greedy interests?

But the joke's on them. It turns out the New York Post's Op-Ed Editor created the graphic. It was part of an opinion piece he published.

. @PressSec tweets out a chart originally put together by the NY Post.

The bracket @PressSec shared was created by @SohrabAhmari

You can fill it out too! https://t.co/Om6TkN7pRX

Some of us still still decided to play.

I got Rachael Maddow vs. Michael Avenatti in the final 2.

It's a toss up between @JRubinBlogger and @JoyVBehar for me. At least Joy doesn't claim to be a conservative like Rubin does. https://t.co/eHTMoWiBa7

Now there's two questions: who's your pick and what's the prize?