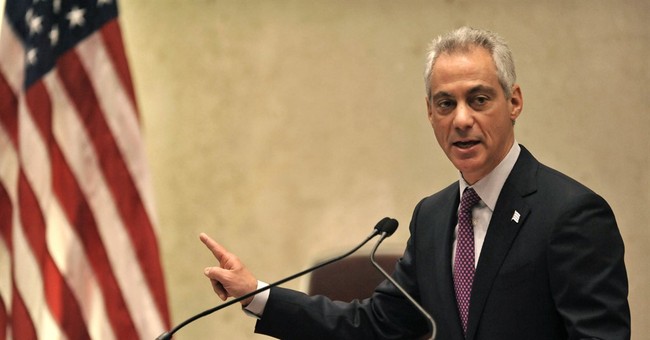 Emanuel's position is far different than other Democrats who say Omar's comments weren't anti-Semitic but rather a criticism of Israel. The Chicago Mayor was blunt about his position, saying, "Her remarks are not anti-Israel; they are anti-Semitic."

No one is questioning the right of members of Congress and others to criticize Israeli policies. But Omar is crossing a line that should not be crossed in political discourse. Her remarks are not anti-Israel; they are anti-Semitic.

Whether consciously or not, Representative Omar is repeating some of the ugliest stereotypes about Jews—tropes that have been unleashed by anti-Semites throughout history. She is casting Jewish Americans as the other, suggesting a dual loyalty that calls our devotion to America into question.

He also explained why Omar's comments bother him:

Maybe I’m sensitive to this charge of dual allegiance because it’s been wielded against me in some of my political campaigns. I’ve been accused of actually being a citizen of Israel. (That’s not true, although my father was an Israeli immigrant to the United States.) In 2002, well before Donald Trump and other “birthers” questioned Barack Obama’s citizenship, I had to produce my U.S. birth certificate in my first run for Congress to disprove false assertions about my background and loyalties.

But it’s not just me who’s been subject to questions of dual loyalty. For centuries, this trope has been aimed at Jews in countries around the world. In embracing it, Omar is associating herself with calamities from the Spanish Inquisition to the Russian pogroms to the Holocaust. That’s not historical company that any American should want to keep.

One doesn’t have to be Jewish to recognize the deep and abiding relationship between the United States and Israel. Yes, there might be serious problems with Israel’s democracy—just as we’re currently experiencing our own. But Israel shares fundamental values with the United States that most of its neighbors have never embraced.

In Israel, women can vote and serve in the armed forces. So can members of the LGBTQ community. Its Arab citizens can vote, form political parties, and serve in the Israeli Parliament. And Israeli women can drive—just as badly as the rest of the population.

But he made one thing very clear: a politician can be critical of Israel without being anti-Semitic:

As for Jewish Americans who support Israel as a friend and ally of the United States, we do so because we recognize the commonality of our values and national interests. And many of us don’t hesitate to criticize Israel when its policies are wrong—or to champion American interests when they come into tension with Israeli goals.

Yes, Omar has to overcome some adversities for being a Muslim in Congress but that doesn't mean that she should be given a pass for the remarks she's made. At least someone in the Democratic Party isn't afraid to call Omar what she is. We have to give Emanuel credit for that.