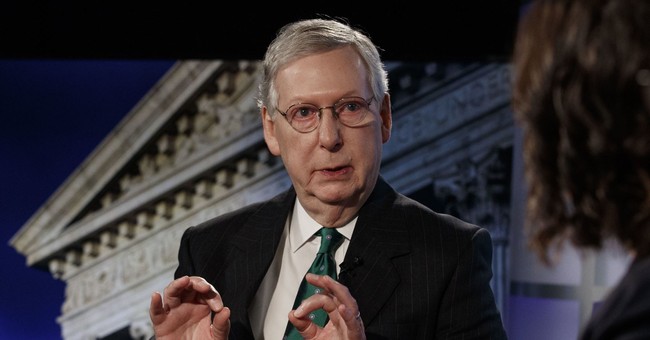 Senate Majority Leader Mitch McConnell (R-KY) on Monday said it's likely the Senate will pass a resolution blocking President Donald Trump's national emergency declaration for his border wall. The silver lining, for those who agree with Trump's declaration, is the Senate may not have enough votes to override a veto, should Trump go that route.

“What is clear in the Senate is there will be enough votes to pass the resolution of disapproval, which will then be vetoed by the president,” McConnell told reporters in Kentucky. “Then, in all likelihood, the veto will be upheld in the House.”

McConnell said he's not happy with Trump deciding to "take this path" by declaring a national emergency. It puts the Republicans in Congress in bind. They don't want to break away from Trump on border security but they also worry about precedent it sets, especially when a Democrat takes the White House.

"That's one reason I argued obviously without success to the president that he not take this route," the Majority Leader said.

McConnell's remarks come after Sunday's revelation that Sen. Rand Paul, also from Kentucky, would vote with Democrats and a handful of Republicans. Other Republicans voting in favor of the resolution include Sens. Susan Collins (R-ME), Lisa Murkowski (AK) and Thom Tillis (NC).

A few Senators, like Cory Gardner (R-CO), Marco Rubio (R-FL) and Mitt Romney (R-UT), have yet to say how they'll vote on the resolution.

The Senate is expected to vote on the resolution before going on break beginning March 15th.

If Trump decides to veto the resolution, this would be the first veto of his presidency.