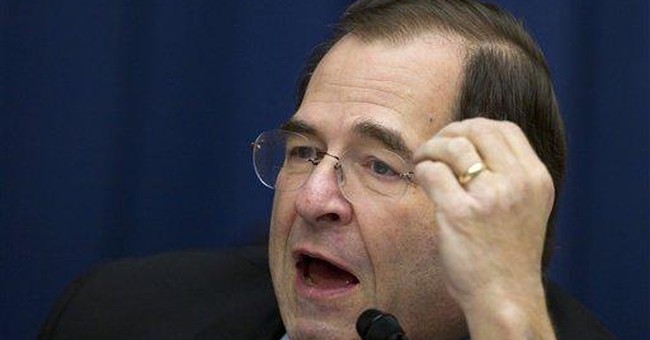 Democrats are desperate to take down President Donald Trump. The Russia probe has proven to be ineffective and, quite frankly, a waste of time and taxpayer money. They didn't find what they wanted so now they're launching another probe.

During an interview with ABC's "This Week," House Judiciary Committee Chairman Jerry Nadler (D-NY) said the Committee plans to request documents from more than 60 people at the White House and Trump Organization. The reason? They want to "protect the rule of law," USA Today reported.

"It’s our job to protect the rule of law. That’s our core function. And to do that we are going to initiate investigations into abuses of power, into corruption and into obstruction of justice," Nadler said.

"The White House seems to have used its power for personal enrichment in violation of the emoluments clause of the Constitution," Nadler said. "We don’t have the facts yet, but we’re going to initiate proper investigations. Before you impeach somebody, you have to persuade the American public that it ought to happen."

The Committee is especially interested in hearing from Donald Trump Jr. and Adam Weisselberg, the chief financial officer for the Trump Organization, and plans to release the full list of names on Monday.

"They're setting a whole new course because there's no collusion so they want to build something else," McCarthy said during an interview with ABC News.

Trump took to Twitter to remind the public that the probe is nothing more than a "witch hunt."

After more than two years of Presidential Harassment, the only things that have been proven is that Democrats and other broke the law. The hostile Cohen testimony, given by a liar to reduce his prison time, proved no Collusion! His just written book manuscript showed what he.....

...said was a total lie, but Fake Media won’t show it. I am an innocent man being persecuted by some very bad, conflicted & corrupt people in a Witch Hunt that is illegal & should never have been allowed to start - And only because I won the Election! Despite this, great success!

Presidential Harassment by “crazed” Democrats at the highest level in the history of our Country. Likewise, the most vicious and corrupt Mainstream Media that any president has ever had to endure - Yet the most successful first two years for any

....President. We are WINNING big, the envy of the WORLD, but just think what it could be?