GOP Rep. Introduces Bill That Would Keep Former Members of Congress From... 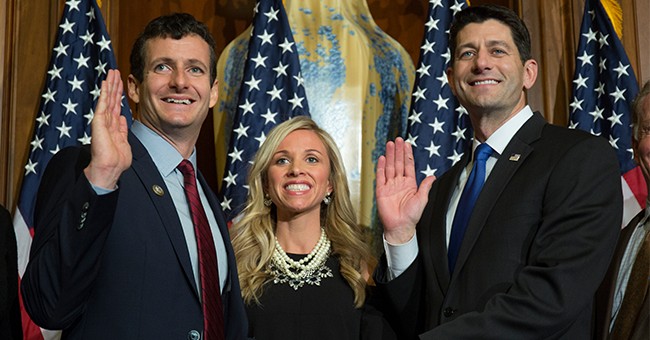 Rep. Trey Hollingsworth (R-IN) on Monday introduced legislation that would prohibit former members of Congress from registering as lobbyists, The Hill reported. The bill also bans former legislators from circumventing lobbying registration requirements. Those who use their political ties to advocate on behalf of someone else would be punished.

“Our government cannot keep operating in a way that puts political promises ahead of the well-being and growth of our country,” Hollingsworth said. “Politicians in Washington should be making decisions they know are right for their constituents and the country, not for their career or future lobbying job.”

Former members of Congress have been criticized for heading to K Street, the lobbying area of Washington, D.C., following their time as a legislator. When legislators become part of K Street they're often utilizing their political ties and connections that they established while in office but they fail to register with the government as an official lobbyist.

Hollingsworth introduced similar legislation last Congress but it failed to advance out of the House Judiciary Subcommittee on the Constitution and Civil Justice.

Sen. Elizabeth Warren (D-MA) is expected to introduce similar legislation in the Senate.

Warren previously went after Barbara Comstock (R-VA) after her time in the House of Representatives. Comstock was named senior adviser in Baker Donelson’s Government Relations and Public Policy Group. Warren made a point to ask the former Congresswoman if she was registered as a lobbyist “or bob & weave around the rules?”

Editors' Note: This post has been corrected to accurately reflect the state Rep. Hollingsworth represents.