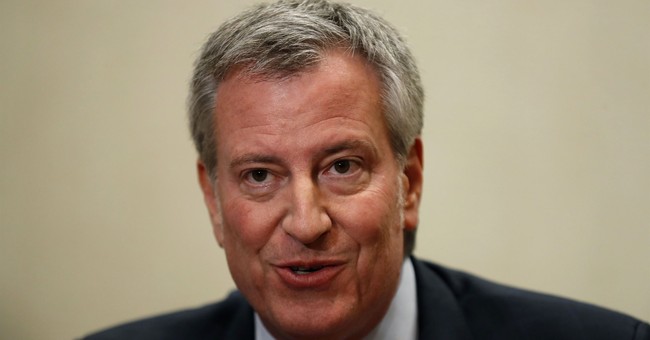 New York City Mayor Bill de Blasio failed at getting junkies to throw their needles in special bins in the park. Now the city is spending $350,000 a year to hire six people to go around and pick up used needles. These people will be “dedicated to routinely canvassing and cleaning high-volume areas” that druggies like to frequent, The New York Post reported.

Here's the icing on the cake: The city is spending another $450,000 a year for "specially trained mental-health workers" to go around and clean out the bins that weren't being used. Those workers will also be responsible for “providing life-saving services and connections to treatment and other care” to druggies they meet.

The announcement comes after The Post wrote a piece about the bin program's failure.

Official statistics obtained by The Post from the first six months of de Blasio’s controversial program show that parks in the Bronx are still littered with dangerous hypodermic needles, with nearly 60,000 found on the ground compared with just 7,000 in Hizzoner’s 44 locked containers

Data collected by the Parks Department from May 1 through Oct. 24 show that only 11 percent of 66,656 needles went into de?Blasio’s bins, which are installed in 14 parks in the Bronx."

Although the program didn't work, de Blasio said it made sense to give it a try, but even people from his own party disagree with him.

This was "a terrible idea since day one," Councilman Ruben Diaz Sr. (D-Bronx), a former drug addict, said. “Instead of addressing the dangerous public-safety conditions this activity creates, the city has turned our parks into shooting galleries."

There are currently 53 parks employees who regularly pick up used needles as part of their routine job duties.

Are you willing to make roughly $58,000 a year between salary and benefits to be a needle picker upper?