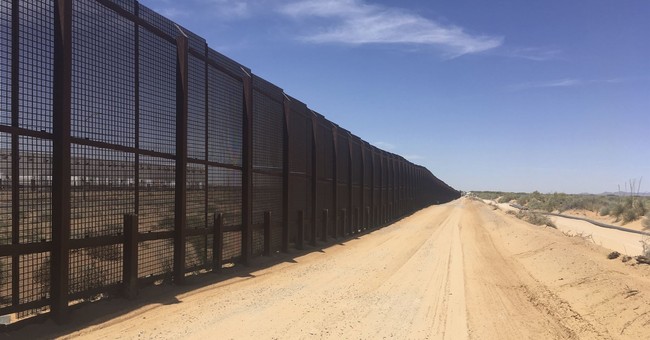 Lefties must be feeling rather desperate as they watch the GoFundMe campaign for the border wall surge well over $16 million. They've now gone to great lengths to create their own campaigns for illegal aliens to circumvent the border wall that is expected to be built, one way or another.

The Human Rights Campaign's Press Secretary for Rapid Response, Charlotte Clymer, created a GoFundMe campaign for ladders so illegal aliens can get over the border wall. She's hoping to raise $100 million. So far the campaign is at a little over $152K.

We saw some folks are raising money for a border wall to keep out our migrant siblings and fellow human beings, who are fleeing violence and persecution and whose tragically-underpaid labor is essential to the U.S. economy. Seems like a bad idea on countless levels for everyone involved.  Maybe we should focus on human rights and creating a community that reflects our supposed values.

And even though at a rate of $1.7 million daily, it would take their fund about 35 years to raise the $21.7 billion that Trump's own Dept. of Homeland Security says would be needed  to build said wall, we wanna make sure ladders are ready to send over to our undocumented friends and help them.

If this seems ludicrous, we welcome you to the coalition of reasonable adults.

Should we not reach our goal--or should they (ahem) not reach theirs--all funds raised will go to the Refugee and Immigrant Center for Education and Legal Services (RAICES) , a Texas-based 501(c)(3) nonprofit agency that promotes justice by providing free and low-cost legal services to underserved immigrant children, families, and refugees.

You see, they’ll never reach their goal, but no matter how much we raise, we’re going to reach ours:

Supporting an organization working to help immigrants seeking legal asylum. This GoFundMe isn’t really about ladders at all. It’s about lifting people up.

This idea is the original brainchild of @HoarseWisperer on Twitter.

Questions? Concerns? Misspelled remarks full of racist vitriol you'd like to pass along? Find me at @cmclymer .

Also: kudos to @NancyLevine  and other advocates who have set up similar satirical fundraising for RAICES at https://gofundthewall.net

As if no one – including Border Patrol – would notice ladders leaning up against the wall with illegal aliens climbing into the United States?

A different GoFundMe campaign was created with the intention of creating tunnels under President Trump's proposed wall. The average citizen is hoping to raise $150 million...to buy shovels for the diggers. So far the campaign has generated a little under $3K.

The American Civil Liberties Union which is focused on defending the rights of immigrant families and says it "won't stop fighting until families are reunited." The organization already has raised over $1 million, thanks in part to donations from celebrities like musician John Legend and his wife Chrissy Teigen.

Let’s help these kids and parents be together and spend time with family, and not in detention centers....

And what makes these people think that again, Border Patrol agents wouldn't notice tunnels right under the border wall? It will become evident when they find continual evidence of illegal crossings taking place in specific areas along the border.

Either these people creating and donating to these campaigns are wishful thinkers or they lack any kind of common sense. Our border patrol agents are a hell of a lot smarter than these people are giving them credit for.