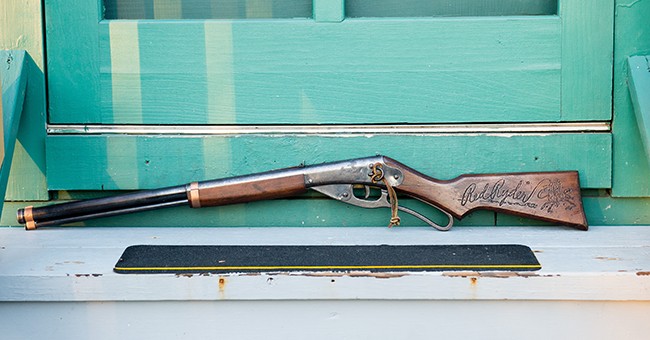 Just when you thought there wasn't anything else that liberals could possibly get offended over, they shock us all. This time, they're upset that a photographer used a replica BB gun for a photoshoot inspired by the hit movie, "A Christmas Story."

For those of you who aren't familiar with the movie, the main character, Ralphie, wears glasses. He's given a Red Rider BB gun for Christmas, which is all he really wants. He also receives a silly bunny costume from his crazy Aunt Clara. And the leg lamp is a prize his father won.

Despite photographer Amy Haehl's disclaimer on her Facebook post, people criticized her judgement (or what they think she's lacking).

“Will now unfollow you. Who the hell would take a picture of a baby and a gun just for money. Such a waste since you are so talented. Think hard about your lack of principles,” one critic wrote in a since-deleted comment.

“Also unfollowing and unliking you. Extremely distasteful…. Guns are never 'cute', not even as a prop or movie reference. Disgusting. The gun culture in this country is a disgrace,” another agreed in another since-deleted comment.

Others enjoyed the photo and Haehl's creative take on the photoshoot:

"I'm following you BECAUSE of this photo and the gun. Thank you for recreating a fond memory with an adorable baby. People need to get over themselves," one person wrote.

"I love this photo!! What a wonderful way to capture an essential Christmas memory for so many people! Dont listen to the ridicule - society is becoming too easily offended!!" another follower said.

Haehl knew the controversy the BB gun would bring but offending people was not her goal.

“Of course I know in the world we live in I was taking the chance that someone would be offended, and I definitely did take that into consideration while still creating a photo with the perfect details,” Haehl told Yahoo! “I know there have been a few comments made in regards to gun violence, and this photo is in no way meant to encourage gun violence or offend anyone who has been affected by gun violence.”

Haehl said she recreated the photo to bring a smile to people's faces and to challenge herself.

“I have learned through my years as a photographer that sometimes you have to do something that fuels your creativity to be excited about and avoid burnout,” she explained. “This photo is that for me.”

The fact that people are upset by this photoshoot is ridiculous. For one, the photographer said outright that it's a replica. It's made out of wood. There is absolutely no way the baby could have hurt himself. People will do anything to be offended.

If I had a newborn baby I would absolutely steal this idea. "A Christmas Story" is one of my all time favorite movies and it's a cute way to get people in the spirit of Christmas.

Well done, Amy, for challenging the status quo and sticking to your guns (literally)!