One Member of GOP Leadership Is In Danger This Election Cycle. Here’s What You Need to Know. 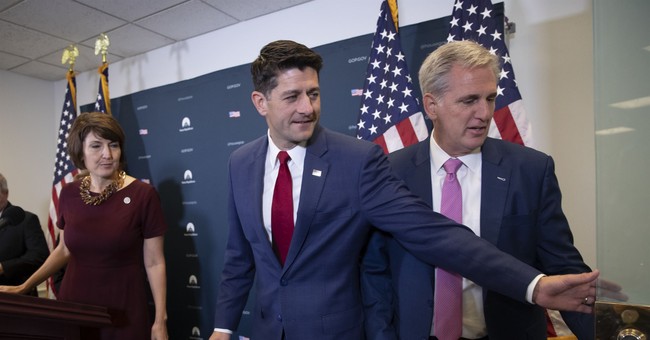 Drive through the small town of Spokane, Washington – which is the "big" city in the area – and you're bound to notice one thing: bright blue signs that say "Lisa Brown for Congress." They're plastered on the sides of houses and businesses. As you start to move north towards the more rural farming area of Greenbluff and Mead, House Republican Conference Chair Cathy McMorris Rodgers' signs appear on the side of hills and his planter beds.

It's no surprise. The city is liberal – progressive even – and the rural community is more conservative. What's interesting is both women are vying for the same district yet they have two very distinct backgrounds with two very specific voter demographics that they represent.

McMorris Rodgers, who is running for reelection after 14 years in Congress, is a solid conservative by the American Conservative Union standards. She has a lifetime rating of 86.86, which means she supports conservative causes and stances the majority of the time. McMorris Rodgers is known as a champion of the pro-life moment and has been supportive of President Trump's border wall. She's also opposed Obamacare, Medicaid expansion and same-sex marriage.

While McMorris Rodgers has been generally supportive of President Trump's policies, she has opposed him on tariffs. That's probably because the majority of her district is based on agriculture. According to the Seattle Times, wheat is a $700 million-a-year industry in the state and 95 percent of that happens in McMorris Rodgers' district.

“I had concerns, and I voiced those concerns from the very beginning about the across-the-board tariffs,” McMorris Rodgers said during a debate with her opponent.

Although McMorris Rodgers has a solid conservative record and represents a district that is more conservative than the rest of the country, she faces a tough reelection battle against challenger Lisa Brown (D). According to the Seattle Times, this is the most competitive race Washington State's 5th Congressional District has seen.

According to federal election commission (FEC) filings, Brown raised more during the last fundraising quarter than McMorris Rodgers. Brown reported $2.2 million in contributions, compared to McMorris Rodgers' $1.42 million. It is important to note that McMorris Rodgers brought in an additional $500,000 but that money was distributed to other candidates and committees, the Spokesman-Review reported.

"In total, the candidates report contributions north of $9.7 million, which already makes the race the most expensive in McMorris Rodgers’ career, and likely the costliest ever for Eastern Washington’s seat. Brown’s total of $4.6 million is three times more than any Democrat has raised against the congresswoman," the Spokesman-Review reported.

McMorris Rodgers also utilized her relationship with the Trump administration to fundraise and campaign. Vice President Mike Pence appeared in Spokane for a fundraiser last month, which resulted in a major backlash from local progressives. A group of protestors had the giant Trump baby brought in to fly above Spokane while Pence was in town. They also coordinated multiple protests throughout the city, something they said was part of a protest of Trump's policies and McMorris Rodgers' association with the president.

While primary results and fundraising numbers make McMorris Rodgers appear to be vulnerable, the National Republican Congressional Committee (NRCC) doesn't appear to be too worried.

"This 'race' is a creation of the Beltway press. CMR is in strong positions accordingly to all the data and polling we have. That’s why we’re not spending," Matt Gorman, NRCC's Communications Director, told Townhall via email. "The Democrats can’t wish seats into play."

Some of the Ads

Both candidates are utilizing their campaign contributions to drop massive ad buys.

Here are two of Rep. Cathy McMorris Rodgers' ads. They focus on pointing out the hypocrisy behind Brown saying she's in favor pell grants and helping college students yet she voted to raise tuition:

Here are two of Lisa Brown's ads. Both focus on the number of years McMorris Rodgers has been in Congress. The main theme: she's been in Washington, D.C. too long and it's time to replace her:

Both McMorris Rodgers and Brown have long-standing political careers.

McMorris Rodgers was hired in 1991 to be Washington State Rep. Bob Morton's campaign manager and later as his legislative assistant. When he retired she was appointed to the House of Representatives to fill his vacancy in 1994. She served in the State House from 1994 to 2005. She served as House Minority Leader from 2002 to 2003. She then ran for Congress in 2004, where she's remained over the last 14 years.

Brown was an associate professor of economics at Eastern Washington University from 1981 to 2001. She then served in the Washington House of Representatives from 1993 to 1997 and as a professor in organizational leadership at Gonzaga University from 2001 until 2012. She then moved to the State Senate where she served from 1997 to 2013. She was the first female Majority Leader during her tenure from 2005 to 2013. She then became the Chancellor at Washington State University Spokane when she left the Senate in 2013. She resigned as Chancellor in 2017 when she began her congressional campaign.

Brown definitely falls on the progressive side of things. She is a strong supporter of Medicare For All, protecting social security and increasing pell grants for college students.

“It’s the right thing to do for families, because especially for young people, they’re in careers that may not provide health care with employment,” Brown said during a debate with McMorris Rodgers. “It’s just the right thing to do, and I think it makes economic sense as well.”

The Cathy McMorris Rodgers and Lisa Brown campaigns did not respond to Townhall's request for comment.