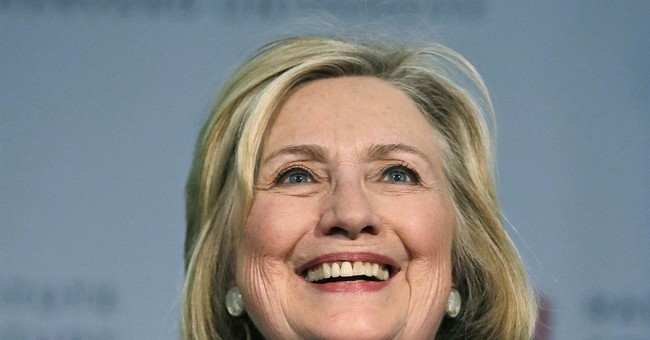 Former Secretary of State Hillary Clinton appeared on "The Late Show with Stephen Colbert" to answer questions the staff had. The segment was dubbed "just one question," but both the questions and answers were very, very scripted.

Here are a few of the Q and As:

"What is your proudest accomplishment as Secretary of State?" one staffer asked.

“Oh, it was just such an honor to work with the incredible diplomats that serve our country around the world," Clinton responded.

"The Rock or Vin Diesel?" another staffer asked.

“What a tough question. Boy, the ‘Fast and Furious’ movies prove that both are masters of high-octane action. And while The Rock is an indispensable part of the later films, Vin Diesel is really the heart at the center of the Toretto family. And in the end, everyone is better off when they’re able to look past what divides them and work together. You know, I like to say, ‘Stronger together,'" Clinton replied.

The entire less-than-five-minute segment was very strange. It felt overly rehearsed, and honestly, like Hillary was trying to win some cheap points with average Americans. Colbert's staff did everything in their power to make her seem approachable and like she's one of us. Except how many of us can say that our husband was once the President of the United States or that we've represented America around the globe?

It's hard to relate to someone who has more money than we can even fathom and family scandals up the ying-yang.

Next time Hillary wants to act like she's relatable to the average Joe, she should consider wear jeans and a t-shirt instead of a typical wardrobe consisting of a pantsuit. If she really wants to up her act she'll even take questions and answer them on the spot. Such a radical notion, right?

Feminist Writer Finally Says the Quiet Part Out Loud Regarding Abortion
Townhall
Think about it: People are 'pro-life' but there's no baby formula on the shelves
Twitchy
Joe Biden's Reported Position on Court-Packing and Filibuster Drives Left Into a Frenzy
Redstate
Don't Like the SCOTUS Decisions This Week? Blame a Greedy Liberal
PJ Media