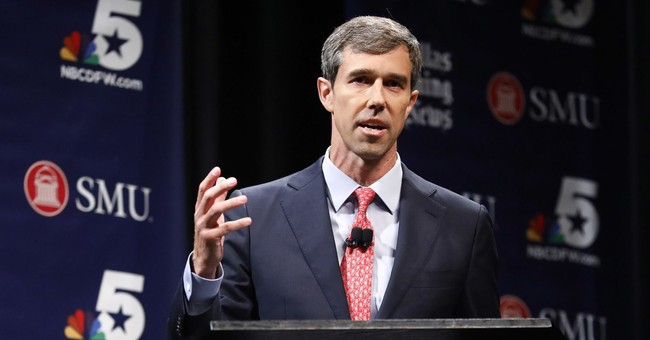 Shannon Bennett of Katy, Texas decided to show her support for Texas Senate candidate Beto O'Rourke in an unusual way: she painted his name in giant letters on her front lawn. Now, her homeowners association wants the sign removed for "violating community standards."

"We were not even halfway through when we started getting visits from angry neighbors," Bennett told Newsweek. "One of those was the HOA president who got out of his pickup truck, confronted us, and told us we were in violation of the deed restrictions."

According to Real Manage, the company the HOA uses to enforce the community rules, the problem is the type of sign, not the sign's content.

"This is not a violation for them placing a political sign; it's the type of signage that they've actually placed on their property being an extremely large painting on the actual grass of their front yard," Steve Jordan, the chief risk management officer for Real Manage, told Newsweek. "It is a landscaping and signage violation. It has nothing to do with it being a political signage. Any type of signage of that nature would be in violation."

"The association's rules are consistent with state law and Section 202.009 of the Texas Property Code, in that it prohibits political signs that are attached to plant material," the HOA said in a statement to KTRK-TV. "The association provided an owner a notice letter giving them an opportunity to cure their violation."

The HOA says they prohibit political signs that are attached to plant material. The association provided an owner a notice letter giving them an opportunity to cure their violation."

According to KTRK, Bennett has five days to remove the sign.