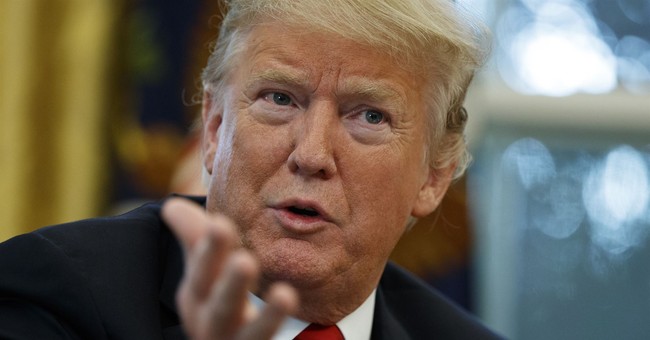 PEN America, a nonprofit coalition of writers, including journalists, filed a lawsuit on Tuesday against President Donald Trump. According to the group, Trump has used his official capacity as President of the United States to "stifle exercise of the constitutional protections of free speech and a free press."

PEN America is partnering with Protect Democracy – which has a bunch of former Democratic staffers – and the Yale Law School Media Freedom and Information Clinic to bring about the suit.

President Trump’s tirades against the press are not new. His cries of “fake news” are an almost daily occurrence. The White House has called for individual journalists to be fired, and the president has referred to the media as “the enemy of the American people.” This has created an environment of hostility toward the media wherein journalists have been subject to death threats, needed bodyguards to cover political rallies, and have faced attacks in their newsrooms. The president has also threatened book publishers and authors who have published critical volumes. While many media outlets are unrelenting in their robust coverage, individual writers may think twice before publishing pieces or commentary that could put them in the White House’s crosshairs

PEN America's executive director, Suzanne Nossel, also wrote an OpEd in POLITICO, which goes into greater personal detail about the suit. Here are a few highlights:

President Donald J. Trump’s frequent threats and hostile acts directed toward journalists and the media are not only offensive and unbecoming of a democratic leader; they are also illegal. In the Trump era, nasty rhetoric, insults and even threats of violence have become an occupational hazard for political reporters and commentators. To be sure, a good portion of President Trump’s verbal attacks on journalists and news organizations might be considered fair game in this bare-knuckled political moment. The president has free-speech rights just like the rest of us, and deeming the news media “the enemy of the American people” and dismissing accurate reports as “fake news” are permissible under the First Amendment.

Actually, some of the reports coming from CNN, MSNBC and the like are actually "fake news." Those outlets have a tendency to spin their opinion as factual. If it's not "fake news," then what is it?

When President Trump proposes government retribution against news outlets and reporters, his statements cross the line.

The communications plan that the Trump administration has established is pretty typical. Why would any communications director or publicist in their right mind give a reporter access to his or her client – in this case, the president – if all they're going to do is attack him?

Back in my PR days, I would have done the exact same thing. If a reporter wasn't fair or favorable to my client or candidate, I would not allow them into events or press conferences. That's call public relations 101.

Using the force of the presidency to punish or suppress legally protected speech strikes at the heart of the First Amendment, contravening the Constitution. Presidents are free to mock, needle, evade and even demean the press, but not to use the power of government to stifle it.

Here's the thing: President Trump isn't stifling anyone's free speech or the freedom of the press. He's not stopping CNN, the Washington Post or even the New York Times from producing their content. They're free to publish whatever they want. They have that right. It's protected under the First Amendment. Trump simply isn't adding fuel to their fire. He's not giving them the ammunition to launch an attack on them. That's the difference.

The last few months have brought violent attacks on journalists, some clearly inspired by the president’s invective. In August a man was arrested for threatening to murder Boston Globe journalists parroted the president’s “enemy of the people” language. White House radio reporter April Ryan, the New York Times’ Bret Stephens, CNN’s Andrew Kaczynzki and others have received death threats.

While it's terrible that journalists have received death threats, how does PEN America know that those are a direct result of Trump's "war on the media?" So many of these supposedly "neutral" journalists go on Twitter rants about what they think of a Trump policy or something he says.

If reporters were truly "neutral," no one would know what political party they're affiliated with.

The lawsuit is nothing more than a bunch of whiny liberal journalists that are upset that a man that they despise is in the White House...and he's not afraid to call them on their crap.

Here's the lawsuit in its entirety: