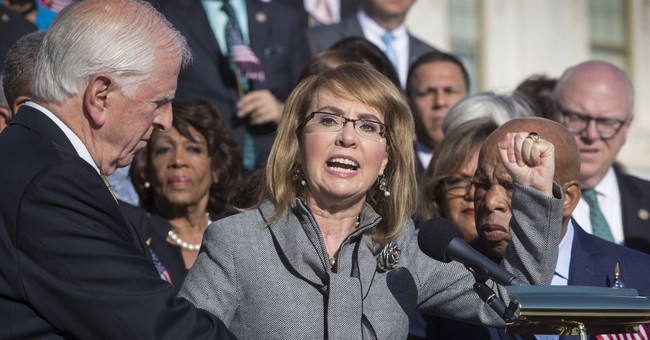 It has been seven years since former Congresswoman Gabby Giffords (D-AZ) was shot during a congressional meet and greet with constituents. Still, to this day, there are people who have conspiracy theories surrounding that tragic day.

Washington Post's congressional reporter, Paul Kane, took to Twitter to spread the very false narrative that the Tea Party – or what he likes to call "Right Wing mobs" – are responsible for the shooting that took place in Tucson back in 2011.

This Nat'l Review editorial would have a lot more potency if NR owned up to fact that 2010 right-wing anger/mobs played a role in dehumanizing Congress, helping lead to Giffords shooting in 2011. https://t.co/7Nd37igSEg

What evidence do you have that shooting was politically motivated?

All the evidence I've seen points to it not being politically motivated and, unless you have evidence to back up this claim, you should really delete and correct this tweet.

Hot Air's John Sexton and Townhall's Guy Benson were quick to remind Twitter of one thing: the Giffords shooter was deemed mentally ill by police. Law enforcement came to this conclusion on multiple occasions and determined he was unfit to stand trial.

Loughner had no discernible political affiliation or motive. He was obsessed with "lucid dreaming" and angry at Giffords for refusing to answer this question to his satisfaction at a previous rally: "What is government if words have no meaning?"

Shouldn’t a reporter know this fact, rather than internalizing liberal mythology?

Given that the NY Times ran with this same error recently, I'm wondering how many journalists out there still believe this.

Following the shooting, liberals were quick to say the shooter's rage was politically motivated. The shooter's friends said he was a registered Independent who was disgusted by both political parties, the Daily Caller reported.

Kane issued an apology but the original tweet is still present.

Sorry. This tweet incorrectly suggested that the tea party was to blame for Giffords shooting. Police never determined a motive for her shooting. https://t.co/rrzwz4Hrp4

It's sad that "reporters" are allowed to spread misinformation like this. How many people on Twitter see a reporter with a blue checkmark and assume that what he's saying is "fact"? And this, folks, is how fake news is spread.