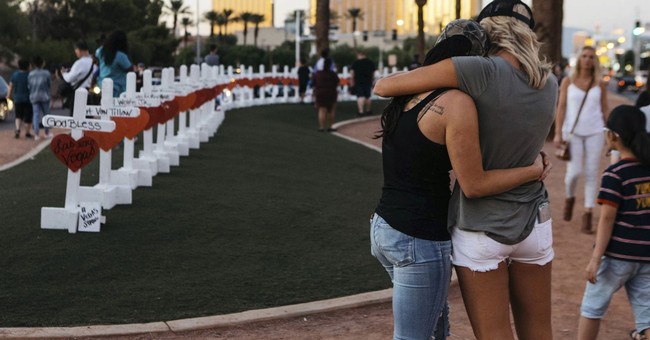 On Oct. 1, 2017, the largest mass shooting in United States history took place on the Las Vegas strip. More than 500 were injured and 58 died at the hands of a shooter who shot at a crowd of roughly 22,000 people attending the Route 91 Harvest Festival. The man shot at the crowd from the 32nd floor of the Mandalay Bay Hotel and Casino while singer Jason Aldean performed.

Since then, country music singers and fans have dealt with the tragedy in various ways. Some artists, like Eric Church, Tim McGraw, Faith Hill and Brothers Osborne have called for stricter gun control.

“Nobody should have 21 AKs and 10,000 rounds of ammunition and we don’t know who they are,” Church told Rolling Stone. “Something’s gotta be done so that a person can’t have an armory and pin down a Las Vegas SWAT team for six minutes. ... I don’t think our forefathers ever thought the right to bear arms was that ... I blame the lobbyists. And the biggest in the gun world is the NRA.”

Both Faith Hill and Tim McGraw were deeply affected by the mass shooting because they have three daughters, which prompted them to speak up.

"Our military … have been fighting for … the democracy of this country for so long. It’s not so we can have citizens that walk this free country … and be afraid they’re going to be shot up by someone as if they were on the battlefield from hundreds of yards away," McGraw told The Tennessean. “It takes smart, thoughtful, pragmatic, commonsense approaches to things. It takes good ideas on both sides. And people have a right to express their opinions, but don’t yell your opinion at somebody and put your fingers in your ears.”

The Power of Song

Some artists used their singing and song-writing abilities to cope with what happened in Las Vegas. Erich Church felt considerable guilt about what took place last October. His performance at the festival was his last one of 2017 and his team had heavily promoted it.

"I felt like the bait," Church told Rolling Stone. "People come to see you play, then all of a sudden they die? That is not an emotion that I was prepared to deal with."

That's how "Why Not Me" came about.

In mid-September Carrie Underwood released the new song "The Bullet," which talks about the devastation associated with shootings. The main lyrics that cause Underwood to choke up: "You can blame it on hate or blame it on guns, but mamas ain't supposed to bury their sons."

Underwood said the lyrics are deeply personal, something she can relate to.

"That was the worst line to sing," Underwood told The Tennessan, her voice cracking with the pain of understanding. "I have a son. I feel like … it works for people in the military, it works for random stray bullet gang violence, it works for cops. It doesn't matter who is on the other end of it. The thing that matters is that there are real people affected and you … don't think about how many people are beyond (the victim), the moms, the dads, the siblings, the future that isn't there anymore."

Although she had planned on including this song on previous albums, she almost kept it off her latest album, "Cry Pretty," because she didn't want to seem opportunistic after the Las Vegas shooting, but felt there was an important message.

The biggest change that's taken place, across the board, is tighter security. Artists' managers are working with concert venues to map out potential fan exits should something go terribly wrong.

“My tour manager has security meetings at shows now, and they go through a lot of things they didn’t go through a year ago,” Michael Ray told USA Today. “They go through in case of a shooting, where’s the exits, what about the safety of the fans? It’s a daily conversation.”

The Onsite Foundation, a Nashville-based nonprofit, has worked with victims since day one to help them cope with the trauma of surviving a mass shooting. They continue to provide funding and mental health resources to those who need them and even have a weeklong intensive trauma therapy camp for victims.

“The most common stage we see a year later is shock,” Miles Adcox, CEO of the Onsite Foundation, said. “Grief isn’t linear. Grief is messy. We’re saying it’s been a year since this happened, let’s offer these families the healing they deserve.”

Victims are encouraged to remember the day and take a moment to pause. It's a healthy habit.