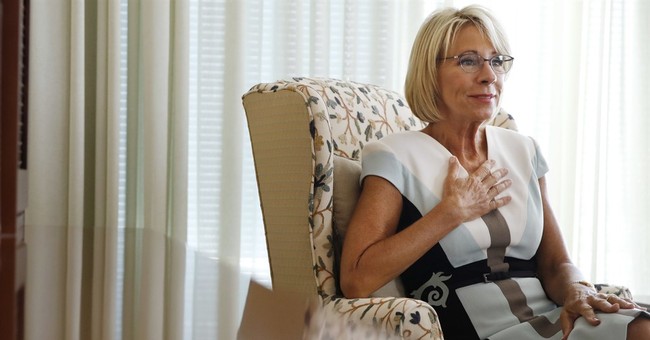 Secretary of Education Betsy DeVos was criticized earlier this year for saying that historically black institutions were pioneers of school-choice, making her unpopular with some African-Americans, even being booed while visiting a college.

In a recent interview with the Associated Press, she clarified the meaning of her statement, saying,  “My intention was to say they were pioneering on behalf of students that didn’t have another choice. That was their only choice.” She continued, conceding that she should have been more adamant, “At the same time I should have decried much more forcefully the ravages of racism.”

A Michigan billionaire, DeVos advocates for good education for students from all backgrounds, saying “…What we should really be talking about is what are we doing to ensure that every single child no matter their family income, not matter their racial background, no matter their zip code has equal opportunities to access a quality education.”

According to the AP, DeVos said that she has “spent her career campaigning” for minority children, saying “That’s where my heart has been for three decades is to really empower and allow all families the same kind of opportunities I’ve had for my kids.” But she is focusing more on the issue than in the past: “I’ve had these conversations with some of the African-American organizations that represent higher education, but probably not as explicitly as I am right now.”

DeVos said that she would not comment on whether race should be a factor in the college admission process, saying that college administrators are “looking at that, that is a factor today.”

“It is not fair to think that when students transit through a K-12 system that is not preparing them for beyond, that somehow we are going to wave a magic wand and things are going to be perfect for them at the higher-ed level.”