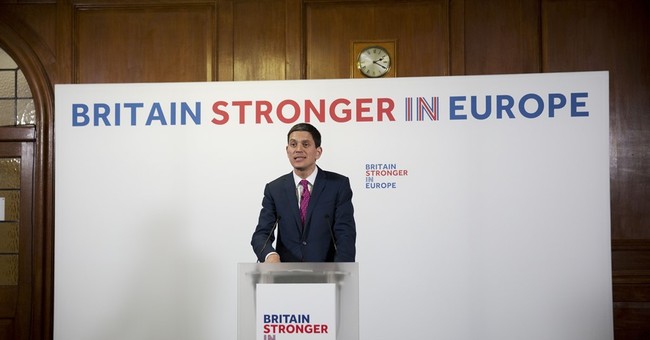 A former European Union official has called for a ban on referenda across the bloc following the Dutch rejection of EU’s immigration policy in a nationwide poll last week. Voters in The Netherlands were promised the right to decide whether every Ukrainian should be given the right to live in their country, but when they voted no the EU said it would push ahead anyway.

Fraser Cameron, a former senior adviser to the European Commission, has now said Brussels should consider outlawing referenda altogether because democracy are making it harder for the EU to push through what it wants.

Writing on the EuroActiv website he said: “Referenda are becoming a huge problem for the EU. The latest result in the Netherlands on the Association Agreement with Ukraine is probably the worst possible outcome. If the turnout had been below 30% the Dutch government could have safely ignored the vote.

He continued: “Undoubtedly there is a growing trend towards referenda. There have been over 50 in the last twenty years. Sometimes referenda are forced upon governments if there is sufficient voter support, as was the case in the Netherlands… Perhaps it is time for an EU ban on referenda!”

The EU has ignored a number of votes in the past. The implementation of the European Constitution was rejected by both French and Dutch voters in 2005. Despite the ‘no’ vote the the EU pushed ahead with the constitution anyway in the form of the 2009 Lisbon Treaty.

At the time the UK had wanted a referendum, but under pressure from Brussels the Labour Party government signed the treaty without consulting the public. All the polling suggested the British would have rejected the Lisbon Treaty had they been given the chance to vote on it.

Irish voters did defeat the Lisbon Treaty but the EU insisted they have a second referendum. That gave them the opportunity to campaign and push the proposal through.

The United Kingdom Independence Party spokesman Steven Woolfe MEP said: “Here is the EU’s disdain for democracy exposed. Fraser Cameron worked as a senior adviser to the Commission for a decade and his is a view held by many in the corridors of Brussels. He and his fellow apparatchiks don’t want the people to have a say in the future development of the European Superstate.”

British voters go to the polls on 23rd June in a referendum on whether to stay in the EU. No side has yet pulled ahead significantly in the race, but there is said to be panic in on the remain side.

This week the government broke its pledge not to campaign and spent around $12m sending pro-EU literature to every household in the country. The move was widely seen as evidence that the Prime Minister, David Cameron, feared the country may vote out.

The UK referendum was scheduled for June because of fears the Syrian migrant crisis will get worse over the summer. Pollsters believe the government would have no prospect of holding the UK in the EU if the referendum was held after the next influx.

Fraser Cameron is not the first senior European to demand an end to referenda. On Friday Luxembourg's Foreign Minister Jean Asselborn told Hannoversche Allgemeine newspaper: “Referendum is not an appropriate instrument to solve complex issues in a parliamentary democracy. If you want to make Europe collapse, you only need to hold more referendums."