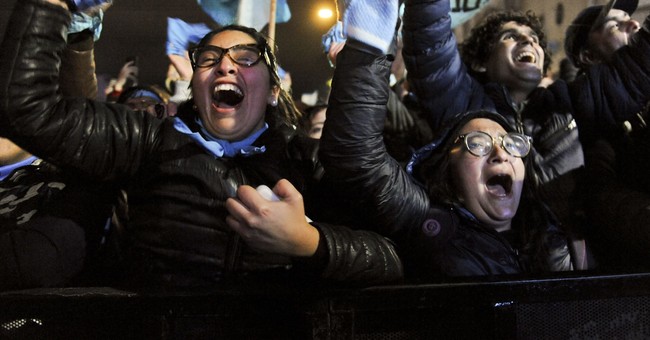 After a more than 15-hour long debate, the Argentine senate rejected a bill Thursday that would legalize elective abortion up to the first 14 weeks of pregnancy.

After the decision was announced, president Mauricio Macri commented that he is pleased the country is able to have serious discussions about such issues.

“We’ve shown that we have matured as a society, and that we can debate with the depth and seriousness that all Argentines expected…and democracy won.”

A video posted by the March for Life Twitter account Thursday shows a crowd in Argentina cheering and waving flags as the results of the vote are posted on a screen.

“The moment life won in Argentina,” the tweet reads.

Since the bill was rejected, women’s rights activists in Argentina have been demonstrating their support for the legalization of abortion.

“We won,” journalist and activist Mariana Carbajal said, “We won because arguments based on religious beliefs showed how deceitful they are.”

In Argentina, abortion is currently allowed only in cases such as rape and if the woman’s health is at risk.

However, according to official statistics reported by Human Rights Watch and Argentina’s Health Ministry, “over 17 percent of the 245 recorded deaths of pregnant women and girls in 2016 were due to abortion, making it the top cause of maternal mortality in the country.”

But Argentine writer Claudia Pineiro wrote Monday that she believes criminalizing abortion is not the answer.

“If we keep prohibiting abortion, it still won’t stop Argentine women from having them. It’s time we legalize and provide a public health framework for a practice that existed, exists and will continue to exist.”

In addition, Jessie Clyde who is the director of Grantmaking and International Partnerships at the International Women’s Health Coalition called the movement “unstoppable,” adding that activists aren’t going to stop pushing for the legalization of abortion anytime soon.

“There is no going back. Women’s rights activists will continue to mobilize and those who refused to listen to their demands will pay a political price,” Clyde said.

“They are confident that change is coming sooner rather than later. The Senate may underestimate the power of the women’s movement, but this fight is not over.”

However, Cardinal Mario Poli who is the archbishop of Buenos Aires told church members “It’s not about religious beliefs but about a humanitarian reason.”

“Caring for life is the first human right and the duty of the State,” he added.

In contrast, the National Association for the Repeal of Abortion Laws (NARAL) tweeted their disapproval of the decision Thursday.

“Experts estimate that Argentinians have over 500,000 illegal abortion procedures every year. Nearly 60,000 people are hospitalized from complications with unsafe abortion — and Argentina’s senators just voted to keep it that way.”

In June, Pope Francis who is originally from Argentina, denounced abortion by saying “Last century, the whole world was scandalized by what the Nazis did to purify the race. Today, we do the same thing but with white gloves,” adding that families should accept children “as God gives them to us.”

Senator Cristina Fernandez de Kirchner who served two terms as Argentina’s president said she had changed her mind about opposing abortion when she saw the women’s rights activists and protestors.

“It was the thousands of young women who went out to the streets who made me change my opinion. To see them criticize the realities of a patriarchal society should force all of us to look at this differently.”