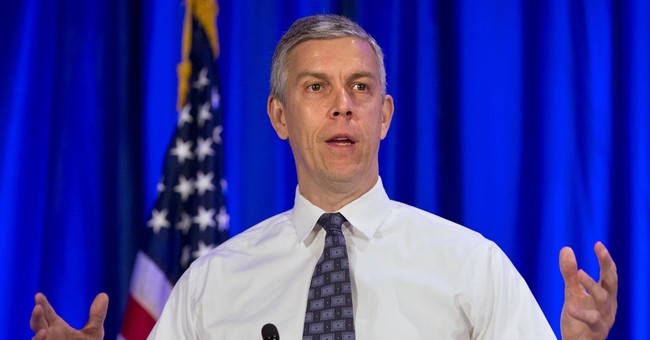 After the deadly school shooting in Santa Fe, Texas on Friday, former Obama-era secretary of education Arne Duncan said it would be a good idea for students to stay out of school until gun laws are reformed.

“This is brilliant, and tragically necessary. What if no children went to school until gun laws changed to keep them safe?”

Duncan said his own family would be willing to participate if it was possible to make it happen.

“My family is all in if we can do this at scale. Parents, will you please join us?” He said.

However, Texas Lieutenant Governor Dan Patrick said Friday that hardening Texas schools in order to deter shooters and ensure the safety of students was one answer to the problem.

“There aren’t enough people to put a guard at every entrance and exit,” he said. “But if we can protect a large office building or a courthouse or any major facility maybe we need to look at limiting the entrance and the exits into our schools so that we can have law enforcement looking at the people who come in one or two entrances.”

Patrick also urged parents who own firearms to “lock your guns safely away.”

In contrast, Houston Police Chief Art Acevedo who participated in the March for Our Lives event two months ago in Texas, said in a Facebook post Friday that this is a time for action.

“I know some have strong feelings about gun rights but I want you to know I’ve hit rock bottom and I am not interested in your views as it pertains to this issue. Please do not post anything about guns aren’t the problem. And there’s little we can do,” he wrote.

A statement released by March for Our Lives said unless changes are made, school shootings will continue.

“This is not the price of our freedom. This is the most fatal shooting since the one at our school and tragedies like this will continue to happen unless action is taken.”

Former Congresswoman Gabby Giffords also released a statement Friday commenting that she feels it’s time for Americans to “take on the powerful and fight for our own safety.”

“We need the courage to take on the special interests who say that nothing can be done, that these acts of evil are beyond our ability to control. They are not. The gun lobby and the politicians who receive the NRA’s checks must understand we will not tolerate another vote against our safety,” Giffords said.

“And if this Congress won’t protect our kids and communities from gun violence, this November we will vote in a Congress that will.”