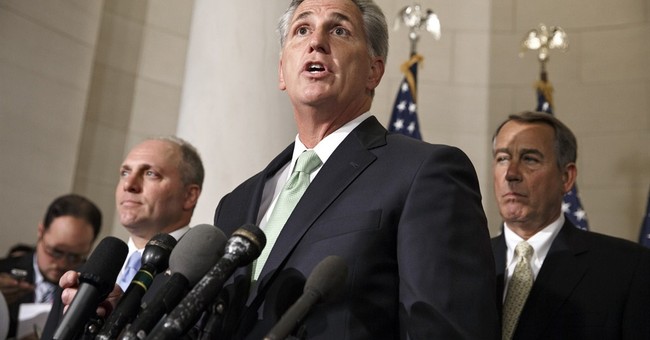 If you had never heard of Kevin Owen McCarthy before last week, you certainly have now.

The 49-year-old Republican from Bakersfield, California, was chosen to replace Eric Cantor, moving up the ranks from House Majority Whip to House Majority Leader Thursday afternoon. Prior to announcing the results of the votes, opponent Raúl Labrador of Idaho graciously accepted defeat and asked that the record reflect a unanimous vote by the GOP delegation for McCarthy’s win.

“I want to congratulate Kevin on his election as Majority Leader and I wish him the best. I had an amazing time running for this position. It was one of the best experiences I’ve had in Congress. I really enjoyed talking with my colleagues one-on-one about the future of our conference and the direction of our party. Everyone I spoke to, whether they voted for Kevin or me, agrees that we can do better. The process needs to be improved, the committees need to work their will, and our members need to feel more relevant. We have a terrific conference – filled with talented, impressive leaders – and I deeply believe that the dialogue we’ve sparked over the past week will lead to a stronger, more successful future for House Republicans and America.”

In McCarthy’s first public statement after the vote, he thanked his constituents and colleagues for entrusting him with the new position. He also told reporters he would “work every single day to make sure this conference has the courage to lead with the wisdom to listen.”

While McCarthy’s role as whip earned him some fair criticism from many on the right, he now has even greater responsibilities for the lower chamber. If members of the conference don’t approve of his initial run at leader this year, they will have the opportunity to hold him accountable come November.

And staunch conservatives outside the Beltway are already holding his feet to the fire, warning that his establishment ways and high-profile politico and celebrity connections are out of touch with grassroots priorities and risk jeopardizing Republican strongholds in the House.

But there’s more to the story.

McCarthy has an established conservative background and comes from one of the most red-leaning communities in the nation. Bakersfield is an old oil and agricultural town with even older family roots that go back generations - where faith, family, and hard work are championed by most who grew up there. Mitt Romney won the district by 25 points in 2012 and registered Republicans outweigh their Democratic counterparts by 16 points.

The new leader-elect put himself through college at California State University, Bakersfield, and is the product of a little luck (the winner of a small lottery) and incredibly hard work. After investing his winnings, McCarthy opened up Kevin O’s Deli - a small business he later sold. He started his political career as an intern for Representative Bill Thomas and held his first elected seat in 2000 as Trustee to the Kern Community College District.

Since then, his political prowess has skyrocketed him up the ladder and has allowed him to forge friendships with colleagues on both sides of the aisle. He was elected Republican floor leader of the California State Assembly in 2003 during his freshman term in office. In 2006, McCarthy made his way to Washington, D.C.; and in 2008, he was appointed Chief Deputy Whip and was elected House Majority Whip by 2010.

Many critics on the right like to share a cherry-picked voting record that makes McCarthy seem more like a RINO than a top conservative strategist, but there are some other things to consider. He was one of the first Republicans to sign the earmark ban and was the only member from House leadership in 2008 to vote against TARP and the Fiscal Cliff. In 2012, he passed the JOBS Act, which empowered small businesses by making it easier to raise capital for new ventures. McCarthy keeps an A-plus rating with the NRA, has a Right to Life score of 100 percent and has been an outspoken opponent of California’s wasteful High Speed Rail project for years. He spends weekends assisting with Honor Flights, showing WWII veterans their nation's capital; and he was one of the first members of Congress to call on Veterans Affairs Secretary Eric Shinseki to resign.

And for those in the Tea Party who claim he isn’t one of them, McCarthy was the top recruiter of the class of 2010 – the Tea Party wave that gave Republicans a majority in the House.

Much of his success has been attributed to his down-to-Earth nature and personable demeanor. Whether you’re John Boehner, Speaker of the House, or Jane Doe, local restaurant owner, many who have met him agree that he’s a genuine listener and a straight shooter.

Dr. Dean Haddock, a clinical psychologist and chairman of the Kern County Republicans, talked to Townhall about the significance of McCarthy’s promotion.

“The first time I met Kevin, he said, ‘Dean, I’m glad you’re here. If there’s anything I can do to help you, you let me know.’ And he meant that. It’s like when you’re the new kid in school, and someone comes to show you the ropes. Kevin is that person, and it’s a reflection of his personality and his natural ability to lead…Someone who’s there for you will have loyalty that follows.”

Haddock also spoke to the criticism that McCarthy is too moderate and compromises too much to be a strong party leader.

“He is conservative, and you only have to look at his personal life to see that. He’s been happily married for years to his high-school sweetheart, they’ve raised two children, and they still live in the first house they bought together. He leads a conservative lifestyle, and that’s just how many of us who have been born and raised here are.”

The Bakersfield resident, whose last run-in with the politician was at the grocery store in the milk aisle, believes that Washington will soon benefit from McCarthy’s hometown conservatism and his desire to find common ground on viable solutions for some of today’s toughest issues.

Becoming the second-ranked Republican in the House will give McCarthy a greater opportunity to use his leadership skills in uniting the party and prioritizing legislative goals.

“Kevin’s a smart business man,” Haddock continued. “Because of that, he looks for the win-win for everyone. That doesn’t make him a moderate. It makes him a good leader.”

Transitioning into the leader’s position will come with more scrutiny from those looking to discredit the party from the left, but also from those who expect more from the right. McCarthy will have a very difficult balancing act ahead of him, but he is equipped with a unique skill set that no other member of House leadership brings to the table. For now, the House stands poised to begin a new future and find a new direction with a leader capable of making significant impacts in many upcoming Congressional races.

Former MSNBC Producer Explains Why She Left in Blistering Letter
Leah Barkoukis
One Democrat's Hypocrisy Soars to New Heights... All Over National Parks
Beth Baumann
With Police Being Attacked and Under Threat of Being Defunded, July Gun Sales Were One for the Record Books
Matt Vespa
Karen Bass Previously Praised the Church of Scientology and Now It's Biting Her In the Butt
Beth Baumann
Why President Trump Is Calling for a Revote In a Primary Election
Beth Baumann
Pro-Police Groups Paint Nation's First 'Back the Blue' Street Mural in Tampa
Madeline Peltzer
CARTOONS | Tom Stiglich
View Cartoon
Most Popular