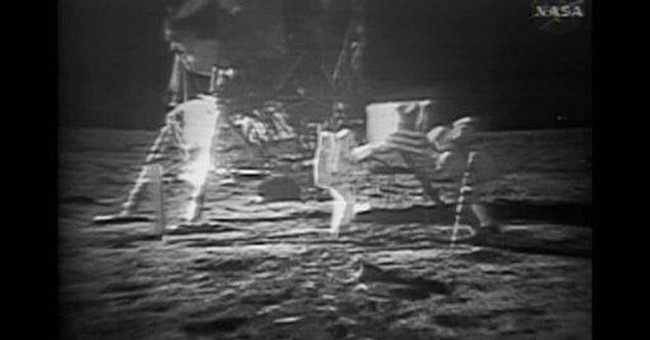 Fifty years ago today the Apollo 11 mission launched from Florida. On the morning of July 16, 1969, American astronauts Neil Armstrong, Buzz Aldrin and Michael Collins blasted off on their historic mission and within a few days, Armstrong and Aldrin planted their feet on the moon on July 20. Vice President Mike Pence and Florida Governor Ron DeSantis are among those commemorating the momentous mission:

50 years ago, Apollo 11 launched holding astronauts that would soon make history and walk on the moon. Today, under the leadership of President @realDonaldTrump, the US has rededicated itself to deep space exploration to the Moon, Mars, and beyond! #Apollo50th pic.twitter.com/emAwB7EVY7

At 9:32am ET, the #Apollo11 launch occurred sending three astronauts on a trajectory to the Moon. As we celebrate our #Apollo50th anniversary, learn more about this mission: https://t.co/LYmABrlzYe pic.twitter.com/Tg40MhzPhs

To fuel a big day of spaceflight, the Apollo 11 crew ate a pre-flight breakfast of steak, eggs, toast, juice, and coffee #OTD in 1969. #Apollo50th pic.twitter.com/OI8lpNabvH

Today we commemorate the 50th Anniversary of the @NASA #Apollo11 launch from Cape Canaveral. This achievement will forever be marked in history by the brave Americans who made the impossible, possible. FL will continue to be a leader in space technology for generations to come. pic.twitter.com/S3WYNoZ5Qd

According to NASA, the launch occurred at 9:32am on July 16, 1969 and the crew’s mission ended with a Pacific Ocean splashdown on July 24, 1969. Neil Armstrong died in 2012, but Buzz Aldrin and Michael Collins are still alive and celebrating the Apollo 11 anniversary.

In honor of the life, the character, and the service of the Commander of Apollo 11: Neil Armstrong, we unveiled his space suit for the first time in 13 years. God Bless the memory and legacy of an incredible American astronaut! #Apollo50th pic.twitter.com/zeyGY3Ttnr

Thanks to everyone who watched and celebrated along with us today! #Apollo50 #Apollo11 pic.twitter.com/jdCnpIFRTK

LIVE NOW: Tune in to hear from #Apollo11 astronaut Michael Collins as we count down to the exact moment when three humans lifted off from @NASAKennedy's Launch Pad 39A on our #Apollo50th journey to walk on the Moon: https://t.co/oAs1n8DQoc

Modern-day astronauts aboard the International Space Station recently delivered remarks about the 50th anniversary of Apollo 11. In the microgravity, astronauts Nick Hague and Christina Koch can be seen passing a floating microphone between each other:

As the 1st humans stepped onto the Moon, the whole world watched in awe. Now, the #Apollo50th anniversary is being celebrated by those on & off the world. @NASA_Astronauts @Astro_Christina and @AstroHague are celebrating on board the @Space_Station. More: https://t.co/kMszpWmB4p pic.twitter.com/Fpx0QvcZJ7

The Apollo 17 mission in December 1972 marks the last time a man walked on the moon, but there are plans to return to the moon by 2024. “The Artemis program will send the first woman and the next man to the Moon by 2024 and develop a sustainable human presence on the Moon by 2028,” according to NASA. “The program takes its name from the twin sister of Apollo and goddess of the Moon in Greek mythology.”