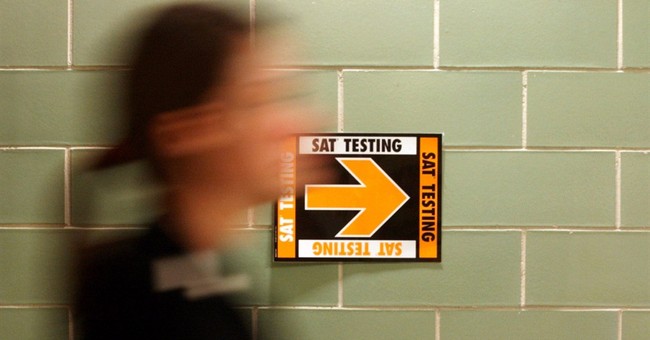 The College Board’s SAT, an exam taken by many as they strive to gain admittance to college, has attracted significant attention due to news about an “adversity score” to be included in SAT results.

The College Board has pushed back against the use of the term “adversity score.” As seen in the tweet below, the organization uses the phrase “Environmental Context Dashboard.”

Some reports have referred to an “adversity score.” The term is inaccurate. What’s being referred to is the Environmental Context Dashboard, a new admissions tool that allows colleges to incorporate a student’s school and environmental context into their admissions process. pic.twitter.com/0xYTnqkQfX

In the Dashboard the “Student’s SAT scores can be seen within the context of the 25th, 50th, and 75th percentile of SAT scores from the student’s high school (3-year average),” according to The College Board website. “The neighborhood and high school measures are percentiles between 1 and 100 with a flat distribution, with 1 corresponding to the least disadvantaged and 100 to the most disadvantaged.”

During an interview on Fox News, The College Board’s President and CEO David Coleman said that his organization is not changing students’ SAT scores: “We don’t change the SAT score. It’s not a new score,” he explained, saying the Environmental Context Dashboard is “a general context in which to look at scores.”

He provided the example of a female from a rural school in Mississippi who had earned 400 points more than fellow students at her high school:

“So, if you look at a test score alone, but don’t know she was 400 points higher than all her peers, you might not see how exceptional her achievement was, you might miss her resourcefulness. So only when you look a score in context can you see that despite growing up in a more impoverished neighborhood with less resources she’s done so well.”

The Environmental Context Dashboard has already been rolled out as a pilot with over 50 institutions and The College Board plans to eventually offer it to all colleges:

The Dashboard will likely have an impact on college admissions.

In a tweet that references the 50-school pilot, The College Board said: “Application readers reported that applicants from higher levels of disadvantage were more likely to be admitted when using the Dashboard.”

“The Dashboard enables colleges to witness the strength and resourcefulness of students in a huge swath of America who would otherwise be overlooked, including students in rural areas, students in inner city areas, and military dependents,” another tweet explains.

The College Board also stated in another tweet: “We're proud that results from our pilot show that using the Dashboard makes it more likely that students who demonstrate strength in overcoming challenges are more likely to be admitted to college.”