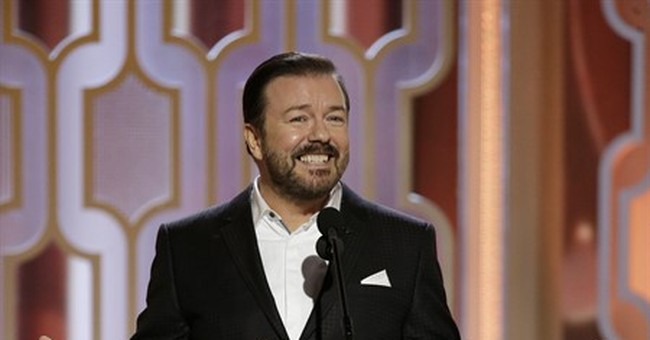 In an interview with talkRadio's Kevin O'Sullivan on Saturday, comedian Rick Gervais called out cancel culture and said that given the increasingly toxic environment surrounding free speech his popular hit "The Office" wouldn't have existed if it came out in 2020.

O'Sullivan suggested that Gervais's UK series "The Office" wouldn't have been given the "green light" today due to cancel culture and the comedian agreed.

Gervais currently stars on the Netflix show "After Life," a dark comedy series he created that explores the painful grief involved in losing a loved one through a comedic lens.

He said the term hate speech is used to label things far too often, without a real definition of "what constitutes hate speech."

Gervais also said that the there a mob-like role in those policing freedom of speech online, and that those who often claim to do so out of "goodness" do not realize how "corrupt and wrong that is."

As someone who is no stranger to speaking his mind, Gervais spoke about how jokes need to be defended because he warned of the axing of jokes due to the fact someone is offended by them.

The 5-Time Golden Globes host has always had a flair for being fearlessly crude and brutally honest, qualities many of his fans admire. During this year's Golden Globes, Gervais ripped apart Hollywood liberals for their typical lectures to the public, even though he stated they "knew nothing about the real world."

Celebrities were outraged with Gervais's 2016 Golden Globes comment about Caitlyn Jenner. Gervais said he had changed, but not as much as "Bruce Jenner." Many were quick to call the comedian transphobic, and were more offended with the comments about transgender people than his follow up joke about the fact Jenner had been involved in a fatal four-car collision that left one person dead.

In the interview, Gervais made it clear that he is for certain regulations on free speech such as libel, slander, the Children's Online Privacy Protection Act (COPPA), and food additives, but he draws the line at censorship at things they merely offend others.

"Just because you're offended doesn't mean you're right," he added.

Gervais made it clear that he never wanted to be a celebrity that lectured people "who think they're above everything because they have a platform."