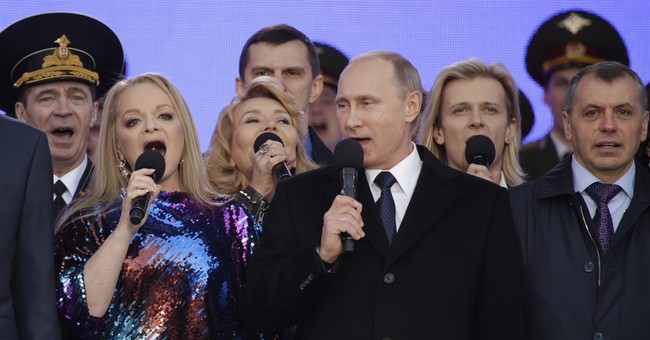 One year ago, the Russian Federation annexed Crimea. Wednesday, Vladimir Putin celebrated the anniversary with a rally in downtown Moscow to culminate days of celebration nationwide. Bands played, crowds of more than 100,000 people gathered in patriotic fervor, and Putin sang Russia's national anthem.

He praised the "amazing patriotism" of the Russian people in supporting the annexation: Putin has described the situation as a historic “return home” for the region.

“We understood that in terms of Crimea it was not a matter of just some territory, however strategically important it is,” Putin said to cheering crowds. “It was a matter of millions of Russian people, our compatriots, who needed our help and support.”

He also addressed Russian heads of state, Federation Council members and regional representatives in the Kremlin Wednesday, justifying the annexation once again.

“In people’s hearts and minds,” he said, “Crimea has always been an inseparable part of Russia. This firm conviction is based on truth and justice and was passed from generation to generation, over time, under any circumstances, despite all the dramatic changes our country went through during the entire 20th century.”

The rest of the world isn’t celebrating, though.

On Monday, the U.S. State Department reiterated its condemnation of the “sham ‘referendum’” in Crimea, that State Department Spokesperson Jen Psaki described as being “held in clear violation of Ukrainian law and the Ukrainian constitution.”

“Over the last year, the human rights situation in Crimea has deteriorated dramatically, with mounting repression of minority communities and faiths,” Psaki said in a statement. “Local residents have been detained, interrogated, and disappeared and NGOs and independent media have been driven out of the peninsula. These brutalities are unacceptable and we call on Russia to stop further abuses.”

The United Nations has repeatedly condemned the Russian takeover, but the Kremlin feels that the annexation is a rightful claim because former Soviet leader Nikita Khrushchev relinquished his hold on Crimea even while the USSR was far from its fall.

"Crimea is a region of the Russian Federation and of course the subject of our regions is not up for discussion," said Dmitry Peskov, a spokesman for the Kremlin.

Ukrainian President Petro Poroshenko has been in Germany since Sunday. German Chancellor Angela Merkel held a press conference with him to demonstrate their unity on the issue. The two have made extensive efforts to bring an end to the Ukrainian conflict diplomatically, but have not been successful in enforcing the Minsk agreement to bring about a lasting ceasefire, or achieving access for humanitarian support to the regions of Donetsk and Luhansk.