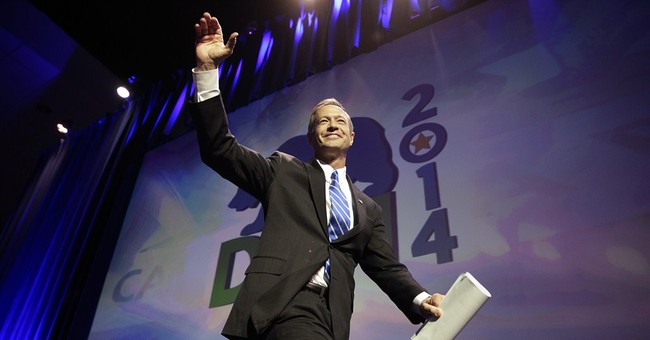 Former Maryland Governor Martin O’Malley (D) is looking more like he’s posturing for a 2016 run every day. But he hasn’t yet thrown Hillary Clinton under the bus over the email scandal.

Saying that he was “sick” of email questions, O’Malley carefully avoided making any negative comments about Clinton’s faux pas at an event at the Brookings Institution on Wednesday morning -- despite several opportunities offered by the press.

“I didn’t watch the press conference yesterday, so I don’t know,” O’Malley said when asked if he was satisfied with Clinton’s explanation of how emails were chosen for deletion. “I didn’t watch it. Because I was working.”

He added, on whether or not he would be willing for his own emails to be released:

“[In Maryland], we abide by all of our state rules on emails, and have many times turned over emails in response to FOIAs -- even though some of them had colorful language that might have caused my mother great embarrassment.”

Instead of offering his opinion on the emailgate scandal, O’Malley made several comments about the future of the federal government that sounded vaguely like the beginnings of a presidential platform.

“The old ways of governing -- bureaucracy, hierarchy -- these things are fading away,” he said, touting Maryland’s progress using data and statistics to track progress during his administration.

“A new way of governing is emerging. And it also calls for a new way of leadership at every level. Leadership that embraces a culture of accountability, embraces entrepreneurial approaches to problem solving, and embraces collaboration.”

O’Malley is planning stops in South Carolina, Kansas, and Iowa in the coming weeks. Polls and pundits have indicated O'Malley as a viable -- though long shot -- alternative to Clinton. The former Governor has said that he will decide with his wife whether to launch a presidential bid in 2016 later this spring, and reiterated today that he is “seriously considering” a run in 2016.

And though he didn’t make any direct comment about Clinton’s latest scandal, O’Malley explained that his vision for new and effective government realizes that effective progress in government necessitates “transparency and openness and accountability.” While Clinton has been the center of ridicule over her lack of tech savvy since her presser yesterday, O’Malley stressed the need for leadership that understands the power of technology in governance.

He also criticized the stagnation of the federal government, explaining that the government has plenty of data, but “too many federal goals are about process, not about outcomes.”

When the people understand the government's priorities, and are openly informed about its progress in achieving those priorities, O'Malley says that's "a government that works."
What Crenshaw Realized About the Democratic Party After Big Tech Hearing That 'Should Terrify Americans'
Leah Barkoukis