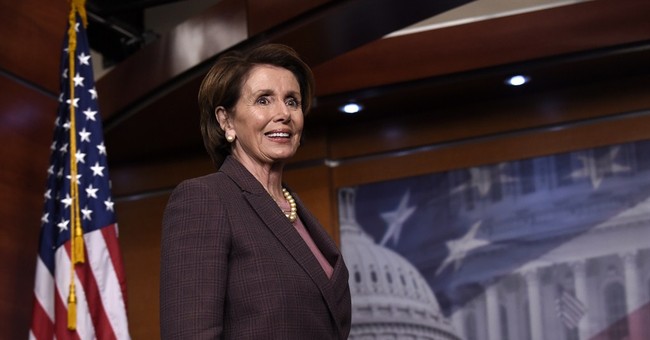 Democratic Leader Nancy Pelosi took a swing at the Republicans in Congress yesterday:

In a questioning period after remarks at the Brookings Institution Tuesday morning, the Minority Leader criticized Republicans for stonewalling the Obama Administration’s policies and working against the president instead of making progress by working with him.

“We worked closely with President Bush,” she said of her time as Speaker of the House during the second Bush presidency. “I only wish that the Republican leadership in the Congress would give the same respect to President Obama and try to find common ground on issues.”

“What I think the president is trying to do here is to, again, exploit envy economics,” Ryan said Sunday. “This top-down redistribution doesn't work. It may make for good politics. Doesn't make for good economic growth.”

According to a fact sheet released by the White House, Obama’s policy includes a tax increase on the top 1 percent “to ensure the wealthiest Americans pay their fair share on inherited assets.”

“I think it is a bad idea,” Ryan said Sunday. “You’re actually making it really hard for a family to pass on a family business to the next generation.”

When asked by Brookings moderator Senior Fellow E.J. Dionne asked what was the first thing to come to her mind when she heard Ryan’s “envy economics” comment, Pelosi responded:

“When I saw it, I called it ‘stale -- yesterday. That isn’t what this is about: people recognize that when people take risk and succeed, it creates wealth, it creates jobs. The concern is that we don’t want that to happen at the exploitation of the worker.”

Invoking “father of economics” Adam Smith’s book, Theory of Moral Sentiments, Pelosi said that the people of the nation have a responsibility to each other.

“We all believe in free markets -- that’s what our capitalist system is about -- but it’s not about laissez-laissez-laissez-faire, where there’s no cop on the beat,” she said.