A Bank on Wheels for the Wealthy 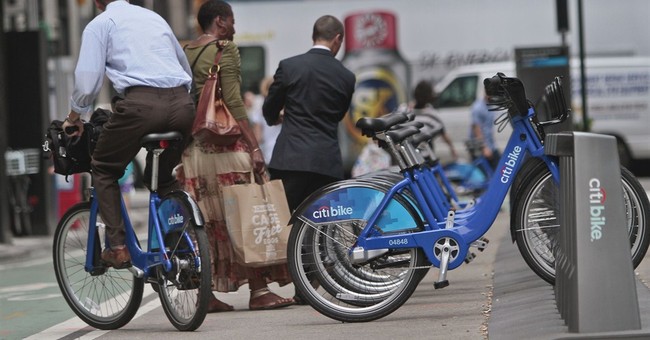 In the May issue of Townhall Magazine, where this article originally appeared, John Ransom explains why there’s more bailout than there is bike in New York City’s Citibike program.

“Citigroup, who was the recipient of over $476 billion dollars of taxpayer bailout money,” wrote Alex Garcia on Townhall Finance in 2012, “has joined forces with the City of New York to sponsor a $41 million dollar bike share program.”

The goal wasn’t quite as ambitious as Obama’s target of a million electric cars on the roads in eight years. But still the program aimed at putting 10,000bikes in 600 locations around New York City for commuters to share in the name of environmentalism, health, and being hip.

And so far the bike sharing program, which sold its naming rights to a bank that at the time owed the United States Treasury for bailout money received, is living up to its storied moniker.

Oh, but that’s not all

Helmets aren’t cheap either. Even assuming a big discount, the city has spent at least $1 million on free helmets.

But according to the city of New York, bike aficionados, and the Institute for Transportation & Development Policy, the program has been an unqualified success.

“The past year has seen sustainable transport flourish,” notes ITDP, “with programs like New York Citibike receiving widespread attention. ITDP has worked with dozens of cities around the world to take steps toward building a better environment for their citizens, and millions of residents are feeling the benefits.”

CNN calls Citibike one of the best-run bike programs in the world noting: “NYC’s Citibike system averages 8.3 trips per bike and 42.7 trips per 1,000 residents.”

And according to Internet sitebikeshare.com: “Since its launch, we’ve seen entertainment stars like Seth Meyers, Lindsay Lohan, Mackelmore, and Leonardo DiCaprio riding Citibike,”adding “Anthony Weiner made headlines after taking one for a spin.”

But underneath the surface there is still more bailout than there is bike to New York City’s bike sharing program.

Maybe it’s just me, but perhaps a company doing business for merely 100days, and subsidized by a private gift, should be doing better than just trying to stay afloat.

The Daily News noted that some residents are now calling for the city to subsidize the bike sharing program as they do other forms of public transportation.

That’s because despite the success touted by the ITDP, bike sharing remains largely an amenity of the rich and privileged.

“The rates of low-income ridership of all bike-share programs around the world is pitifully low. So we can only do better,” Caroline Samponaro of Transportation Alternatives in New York told NPR. “The demographic information I’ve seen to date is that it’s more men than women, and only 0.5 percent are low-income New Yorkers.”

That’s because behind the feel-good façade are economics that just don’t add up.

For a $95 annual fee, bike-share members in Manhattan get all-you-can use access to the silly looking Citibikes in45 minute increments.

That’s how private property works in America. And that way you can use your bike all the time.

So while the program remains very popular for metro-testicled males in Manhattan, who apparently have money to burn in the quest to remain hip, presumably those with less discretionary income are a little wiser with their money. They a way to get from point A to point B, cheaply and efficiently.

But expect NYC to spare no taxpayer expense to keep the program going no matter how little financial sense it makes.

This is more than just a bike program. We’re saving the planet here people.

“We’re talking to them,” Trottenberg told the Daily News about keeping the bikeshare company afloat. “I would put it this way—all options are on the table. I think everyone agrees it turned out to be a real bargain for New Yorkers, who used the system twice as much as users of other cities.”

And when politicians say that that means taxpayers will eventually get taken for a ride to subsidize the feel-good hipness of those who know better than you.

Not coincidentally, these are people who often live in Manhattan. •

John Ransom is the editor of TownhallFinance.com