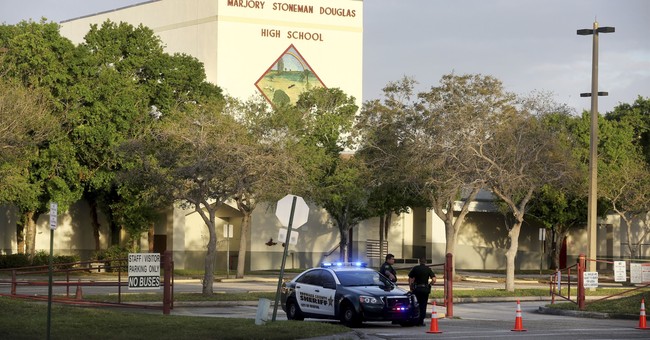 It is now abundantly clear that the Broward County Sheriff's department utterly failed to prevent 17 innocent Americans from being killed by a demented madman with a gun due to the Florida county police department’s top down irresponsibility and cowardice. But, a new report shows that Broward County police not only stalled their own deputies in responding to events on that tragic day on February 14, 2018, they also forbade paramedics from immediately responding to the situation. In fact, some paramedics had to ask six times for permission to enter the school to begin aiding those wounded by the gunman.

The Miami Herald reports that Coral Springs-Parkland Fire Department paramedics arrived to Marjory Stoneman Douglas High School within minutes of the shooting. But, two separate task forces were prevented for a lengthy amount of time from entering the scene due to Broward Coward police protocol.

“Michael McNally, deputy chief for Coral Springs fire-rescue, asked six times for permission to send in specialized teams of police officers and paramedics, according to an incident report he filed after the Feb. 14 Marjory Stoneman Douglas High School shooting that left 17 people dead.

But every time McNally asked to deploy the two Rescue Task Force teams — each made up of three paramedics and three to four law enforcement officers — the Broward Sheriff's Office captain in charge of the scene, Jan Jordan, said no.

"The [BSO] incident commander advised me, 'She would have to check,' " McNally wrote in the report released Thursday by Coral Springs. "After several minutes, I requested once again the need to deploy RTF elements into the scene to ... initiate treatment as soon as possible. Once again, the incident commander expressed that she 'would have to check before approving this request.' "

"Even after the shooter had been arrested, the answer remained the same.” (Emphasis added)

SWAT team medics were allowed to go inside instead. As the Broward County Sheriff’s office noted, typically RTF medics are allowed in after the threat has been confirmed neutralized. But, McNally asserts, and evidence proves, that the sheriff’s office was unprepared to determine whether or not the shooter had be taken down.

"The command post was inundated with too many people and made it impossible to establish and function," McNally wrote, echoing criticisms of the disorganization and lack of a unified command structure that plagued BSO's response to a deadly shooting at the Fort-Lauderdale-Hollywood International Airport last year.

In his report, McNally acknowledged that RTF teams may not have helped in the end — but he said Jordan couldn't have realized that when she repeatedly denied his requests."

"Later, it was determined that the RTF element may not have aided in any additional care to patients," McNally wrote. "However, this information was not known at the time of the requests."

As noted by McNally, the disorganization of the sheriff's response created a scene of confusion. Furthermore, several of those from the police department refused to enter the building. But, those medics who wanted to enter were told they could not. This point was made by Hunter Pollack, older brother of Meadow Pollack who was killed that day.

The @browardsheriff allowed the deputy who hid while my sister was killed the privilege to resign with full pension. Then Captain Jan Jordan advises paramedics at the scene to not enter the building. Who would feel safe with this poor BSO leadership in office until 2020?