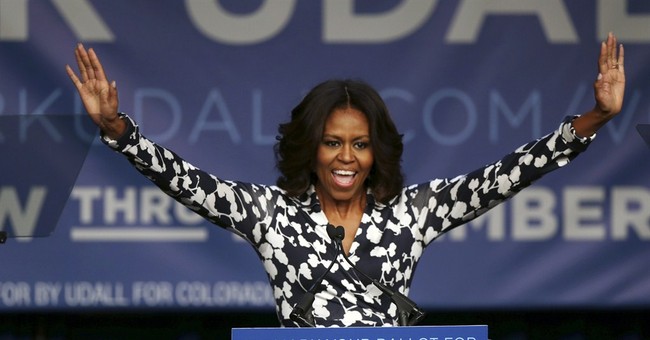 Keep in mind: Udall is the very same man who tried to distance himself from Obama only a few short weeks ago by claiming he is the senator the White House feared the most. So much for disassociation.

Not only did Michelle Obama show she wanted Udall back in the Senate (a desire which hardly seems fear-driven), she boasted about Udall’s role in creating Obama’s ‘hope’ and ‘change:’

The chance of this helping Udall in his race against Republican Rep. Cory Gardner is slim. Two-thirds of likely voters claim their opinion of the president will be a deciding factor in how they vote on Nov. 4, according to a recent Denver Post poll, and 56 percent of Coloradans disapprove of Obama’s work.

But for all her love and support, Michelle Obama revealed that she perhaps didn’t really know which candidate she was there to support:

FLOTUS was not the only one to forget her notes, however. Remember that famous quote by Martin Luther King, Jr. about judging people by “the content of their character, not the color of their skin?” Unfortunately, Mark Udall didn’t. While introducing the First Lady, Udall made this uncomfortable slip:

Yikes! Imagine if a Republican candidate had made that gaffe; the media would have a field day. It didn’t take long for the response of the crowd to alert Udall of his mistake.

According to a Quinnipiac University poll released Friday, Gardner is up at 46 percent while Udall sits at 41 percent.