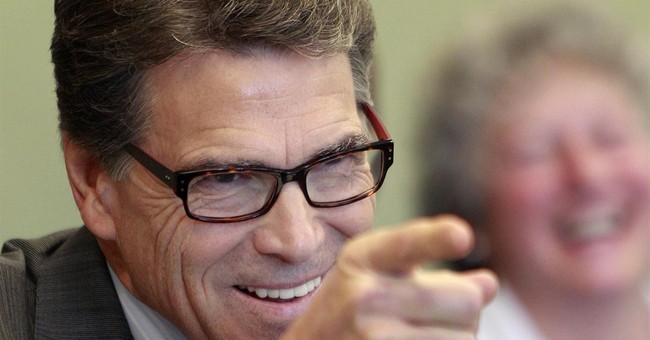 Texas Governor Rick Perry's Super PAC is raising money by selling shirts with his mugshot across the front. The picture shows the governor, suited up and grinning, with the word "wanted" stamped in red above his head. The shirts are going for $25 and are available for a "limited time."

Rick Perry's PAC is selling these shirts at an AFP event here in Manchester, NH. pic.twitter.com/47Vjim473M

Perry pleaded "not guilty" after a grand jury indicted him for abuse of power. After his mugshot, he went out for ice cream. Breitbart reported:

Perry wanted Travis County District Attorney Rosemary Lehmberg to resign from her post after she was arrested for drunken driving. When she refused to step down, Perry vetoed funds for the public anti-corruption unit that Lehmberg headed. Perry has said he would do it all over again and vowed vigorously to fight the charges.

The front of the RickPAC shirt has Perry's mugshot and says Perry is "wanted" for "securing the border and defeating Democrats." The back of the shirt has Lehmberg's mugshot with "guilty" stamped above it and the words "driving while intoxicated and perversion of justice" underneath it.