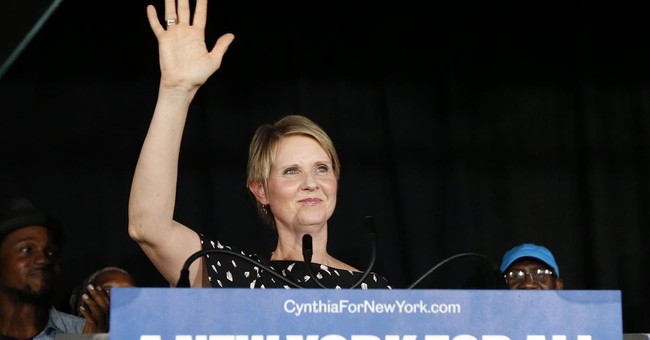 The New York primaries are over and while the far left did not have success at the top of the ticket, six candidates bumped Democratic incumbents. Alexandria Ocasio-Cortez, the far left insurgent who knocked off top Democrat Joe Crowley, has some more allies. Julia Salazar was one of them:

Years of anger at a group of Democratic state senators who had collaborated with Republicans boiled over on Thursday, as primary voters ousted nearly all of them in favor of challengers who had called them traitors and sham progressives.

The losses were not only a resounding upset for the members of the Independent Democratic Conference, who outspent their challengers several times over, but also a sign that the progressive fervor sweeping national politics had hobbled New York’s once-mighty Democratic machine, at least on a local level.

The most high-profile casualty was Senator Jeffrey D. Klein of the Bronx, the former head of the I.D.C. In that role, he was for years one of Albany’s most powerful players, sharing leadership of the chamber with his counterparts in the Republican conference and participating in the state’s secretive budget negotiations.

But on Thursday, he was defeated by Alessandra Biaggi, a lawyer and former aide to Gov. Andrew M. Cuomo, after a campaign in which Ms. Biaggi cornered Mr. Klein into spending more than $2 million, an astonishing sum for a state legislative race.

In another high-profile race, Senator Martin Dilan, who was not part of the I.D.C., was defeated by Julia Salazar, a 27-year-old democratic socialist whose candidacy energized young voters in swaths of gentrifying Brooklyn, despite near-constant controversy in the final weeks of the campaign.

Yet, thesame could not be said for Sex and the City star Cynthia Nixon, whose primary challenge to incumbent Democratic Gov. Andrew Cuomo fell way short. Cuomo handily beat the far left Nixon (via WaPo):

New York Gov. Andrew Cuomo bested actress Cynthia Nixon by an almost two-to-one margin Thursday to win the Democratic primary for a third term. Remarkably, he finished four points higher — with 66 percent of the vote — than he did four years ago against Zephyr Teachout, a then-obscure law professor who raised almost no money and received a tiny fraction of the attention that has been bestowed on the former “Sex and the City” star.

Cuomo moved to the left to fend off Nixon’s challenge. He came around to endorse decriminalizing marijuana and banning plastic shopping bags, among other things. In her concession speech last night, Nixon claimed credit for shifting the conversation. “We have changed what is expected of a Democratic candidate running in New York and what we can demand from our elected leaders,” she said. “Some have called this the ‘Cynthia effect.’”

Democratic strategists say high turnout shows the rank-and-file, across the ideological spectrum, are engaged and energized. Twice as many Democrats voted in the 2018 primary as did in 2014. The surge of new voters mostly came from New York City and the suburbs. Cuomo actually received fewer votes four years ago (361,000) than Nixon did Thursday (512,000, with 99.6 percent of precincts reporting)

So, at the top, the establishment did well. The same could not be said down ticket, but the Times noted that Cuomo focused on Trump, “kept it old school,” and won. We’ll get to that in a second. The memo from the Nixon campaign concerning why she lost is well, a bit funny. They blame the high turnout. So, she lost because Democrats…voted (via The Hill):

In a memo sent to reporters as polls closed, Nixon's campaign sought to justify their candidate's performance while blaming high voter turnout advocated by Cuomo as one reason she fell so far behind the incumbent Democrat.

Nixon's team cited what they called an "unconscionable influx in spending" from Cuomo's campaign, labor unions and the state Democratic Party, which Cuomo helps fund and which sent mailers critical of Nixon to voters across the state.

"The result of this unconscionable influx in spending is that turnout is extremely high throughout the state today," Nixon's team wrote in the memo. "This is likely due to two factors: tens of millions of dollars in advertisements from Andrew Cuomo pushing voters to the polls; and a desire on the part of prime Democratic voters to send a message to [President] Trump for the first time since his election."

Okay, well—you could think that if it helps you sleep at night. The fact is it appears Nixon couldn’t break through to voters outside of the far left base she amassed, and those folks are not the majority of the voters. It’s not even close. And given Cuomo’s 65 percent trouncing of Nixon, it seems clear that a lot of New Yorkers aren’t convinced by the progressive left’s agenda (via NYT):

On paper, Ms. Nixon had a unique and potentially potent mix. She was a woman in a year in which female candidates have been popular and successful. As a longtime activist and education advocate, she had heartily embraced ideas like universal health care and abolishing Immigration and Customs Enforcement, both catnip for progressives.

Yet, for all of that, Ms. Nixon never seemed to connect with voters outside her left-wing base, as polls repeatedly showed her trailing among every demographic, almost always by double-digits. Her final tally — about 34 percent — was slightly higher than her earlier polls showed, but nowhere near the 40 percent mark her supporters had hoped for as a face saver.

Several things may have contributed to Thursday’s outcome: Ms. Nixon had stumbled on a couple of policy questions, and never really seemed to completely warm to public speaking. But in the end it may have been something simpler.